For dinner tonight I made a spicy curried squash soup. For the base of of my soup I made a crock pot chicken broth using last night's chicken carcass.  The idea behind using the crock pot is that I can cook the broth at a very low heat overnight, or about 8 hours.  This allows for tons of flavor to be extracted from the chicken.

I placed the chicken carcass in the crock pot along with a few chicken wings that I roasted in the oven, carrots, celery, onion and bay leaf.  I added salt and pepper and cooked on low overnight. 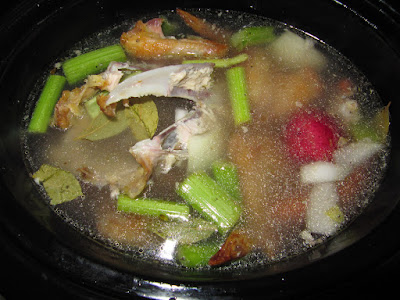 In the morning I woke up to the great aroma of chicken and vegetables.  The broth was flavorful and the chicken had imparted all of its flavor.  I strained the broth which I used to make my curried squash soup. 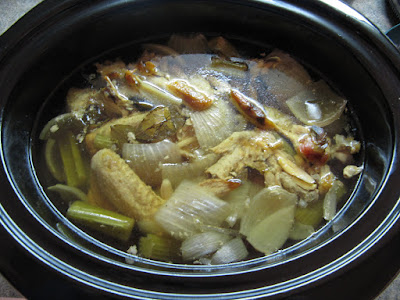 To begin I first cut a butternut squash in half and scooped out the seeds.  I cut the squash into large chunks, drizzled with a bit of oil, seasoned with salt and pepper and placed in a 375 degree oven for an hour, until the squash fell apart easily with a fork. 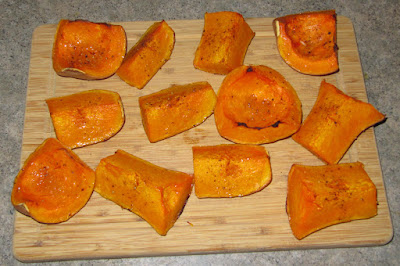 Using a spoon, I pulled the meat of the of the squash away from the skin and added to a blender.  To this I added two guajillo chiles which I seeded and added to the blender along with a couple cups of chicken broth. 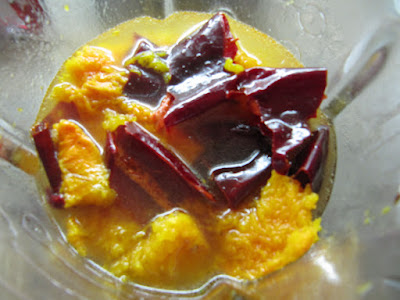 I blended this mixture until the squash was smooth and the guajillo was fully blended.  I set this aside  momentarily to focus on the spices for the soup.  In a saucepan I sauteed onion, garlic, ginger and serrano chile then added 1 teaspoon each of tumeric, garam masala, ground cumin, ground coriander, cinnamon and brown sugar.  I sauteed for another minute or so and added to the blender. 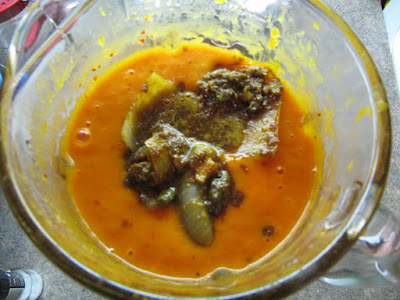 After blending one last time I added a splash of heavy cream.  I served the soup in a bowl with a few pieces of last night's chicken and some cilantro.  The soup was rich and had a good amount of heat to it.  With the temperature getting so cold, this was the perfect way to warm up. 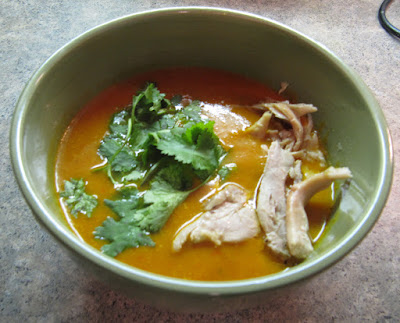 Check out the recipe tab for this and other recipes.
Posted by Anonymous at 11:01 PM