Nothing beats a good roasted chicken, it is one of my favorite things to make and to enjoy.  The great thing is that it is really very simple to make and will always taste delicious.  I can't have roasted chicken without lemon, it is my favorite flavor to go with the meat so I made sure to incorpate as much of that flavor as possible.  To go with the chicken I roasted some broccolini and placed on a bed of linguine that is finished with some bacon and asiago cheese.  I made a simple salad with a lemon vinaigrette to finish off dinner. 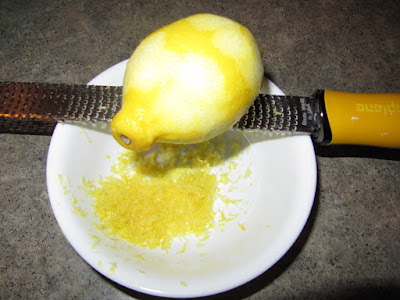 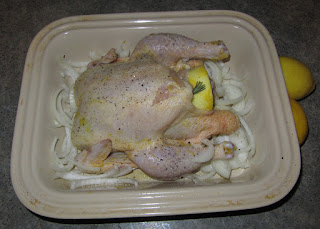 I placed the chicken in a baking dish over a bed of sliced onions.  I started the oven at 425 degrees, then proceeded to lower the temperature to 375 once the chicken was in. The chicken roasted for about an hour or until the leg easily pulls away from the thigh and the juices run clear.  I took the chicken and placed it on a dish to rest.  I placed the pan juices along with the juice of one lemon in a saucepan and simmered for about 15 minutes to make a quick pan sauce. 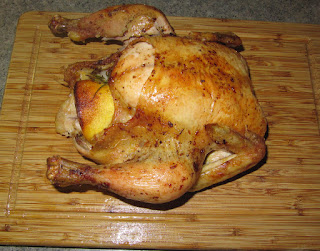 I have to admit I had no idea what broccolini was when I saw it at the store other than it seems like more tender broccoli.  I found that this vegetable is basically a mix between broccoli and gai lan or Chinese broccoli.  The taste is somewhat similar to regular broccoli except the stems are more delicate and the tops a bit crunchier. 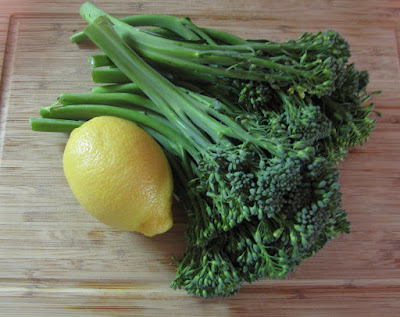 I placed the broccolini in a baking dish with thinly sliced garlic.  I drizzed with olive oil and sprinkled with salt and pepper before placing in the same 375 degree oven for about 15 minutes or until the stems were al dente. 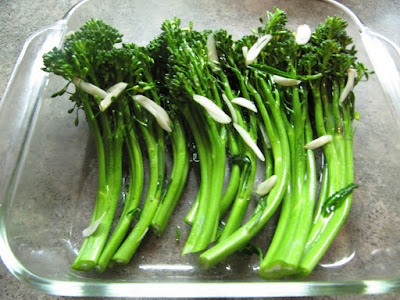 To prepare the pasta I boiled a couple of handfuls of dry linguine in a pot of boiling water.  In the meantime I sauteed some bacon bits I fried up earlier with diced onion in a large pan.  I stopped boiling the pasta a couple of minutes early because I wanted to finish cooking in the pan with the bacon.  I added the pasta to the pan along with a couple of ladles of pasta water.  While heating the pasta on medium I added about a handful of shredded asiago cheese and a couple of teaspoons of ground nutmeg.  I tossed the pasta with the roasted broccolini and I continued to cook through until the pasta was al dente. 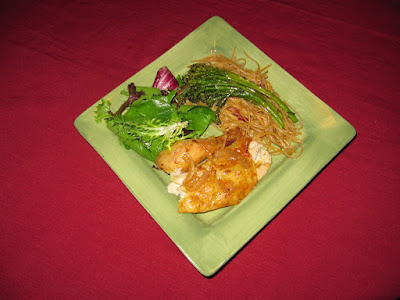 I served the chicken alonside the linguine with the broccolini sitting on top.  Alongside I added a simple salad with lemon juice seasoned with salt and pepper.  The chicken was roasted perfectly.  The skin was crispy and the breast was moist and tender.  I spooned a bit of the pan sauce over the chicken to add additional lemon flavor at the end.  The broccolini went well with the bacon and nutmeg in the pasta as well as the lemony chicken.  For me nothing quite compares to a roasted chicken, it is a fail proof dinner that you can simply pair with a salad or with any other side for a simple and satisfying meal.  As an added bonus once cleaned of all the meat, the chicken carcass can be boiled with carrots, onion and celery to make a tasty chicken broth.

This is the first dish on my blog for which I have written a full recipe.  Please try these dishes and let me know how it goes!
Full recipe after the jump...

1 whole chicken, giblets removed
1 lemon, sliced in half
½ of an onion, cut in half
2 sprigs of rosemary
Zest of 1 lemon
Olive oil
Coarse sea salt
Pepper

Linguine with Roasted Broccolini and Bacon:

A few handfuls of mixed greens, arugula, herb salad or any fresh green you choose
Juice of 2 lemons
1 – 2 tbsp olive oil
Salt and pepper to taste

Email ThisBlogThis!Share to TwitterShare to FacebookShare to Pinterest
Labels: Chicken