I found myself with a few extras yesterday.  Some uncooked shrimp from a party, a can of coconut milk and some leftover tomatillo salsa that was initially meant for chilaquiles.  I wondered what mixing the coconut milk and salsa would taste like so I gave it a shot.  The salsa was made up of tomatillos, onions, garlic, cilantro, lime juice, cumin, oregano and bay leaves.  I added this to a mason jar with coconut milk and shook it up, this is the result. 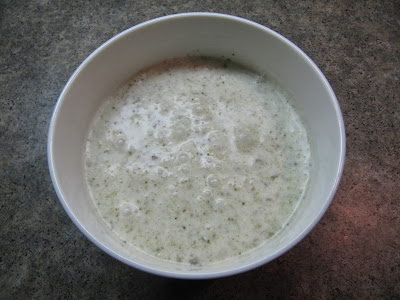 The rest was simple to make.  I started by sauteeing onions and garlic in a pan before adding the shrimp.  I cooked the shrimp until it was almost cooked through.  I then added the coconut milk/salsa mixture and let it come to a simmer.  I removed the shrimp and left the sauce in the pan to simmer for a couple of more minutes.  I added pumpkin seeds at the last minute for a bit of crunch.  I finished by pouring the sauce over the shrimp. 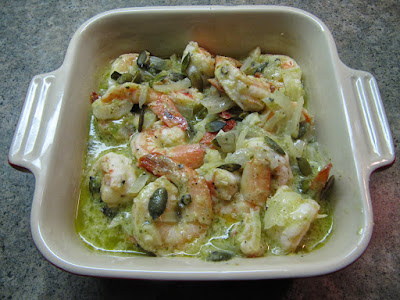 ﻿
﻿The sauce was delicious and rich, but the tomatillo and lime also brought some freshness into the dish.  The pumpkin seeds added a nice crunch as well.  I saved some sauce and will be making this again, but perhaps with some cilantro and onion on top.
Posted by mostlybadfly at 11:06 AM