To begin, peel 1 potato, peel and chop into cubes. Then break off pieces of cauliflower until you have about 1 cup. You will place both of these in a small pot with chopped garlic and cover a little less than halfway with milk. Add a generous pinch of salt and pepper. 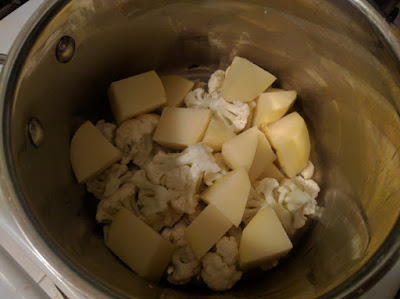 Cover and let the ingredients simmer under medium-low heat for about 20-30 minutes, stirring occasionally. Keep an eye on the milk, if it is boiling too much vs a gentler simmer then lower the heat.  You want to be able to eventually smash these so test after 20 minutes by pressing down on a potato with a wooden spoon.  Cut the potatoes into smaller cubes so they cook more quickly. 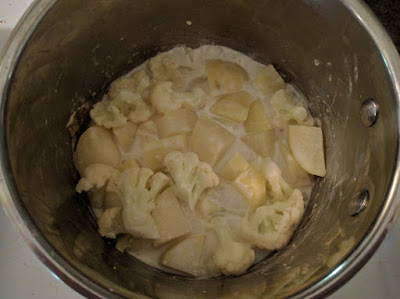 You will be able to smash the cauliflower/potatoes after a while. It doesn't need to be super smooth, you want some chunks of potato/cauliflower to remain for texture. 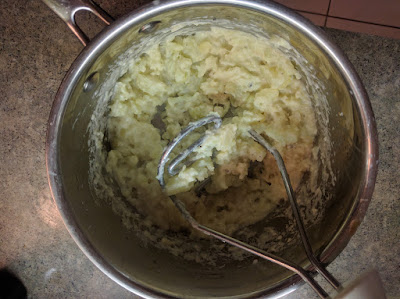 While the potatoes are simmering, chop the stems of of brussels sprouts, slice once lengthwise, then slice each half again, so you have four pieces, cut across these so then you have 8. Basically you just want to chop it up into smaller pieces. 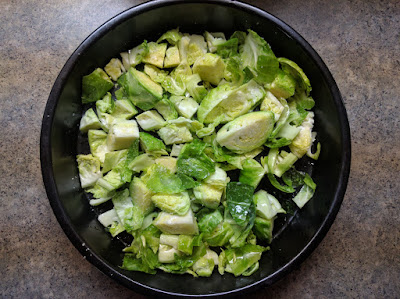 Toss with olive oil, salt, and pepper and roast. at 400F for about 20 minutes.  Stir them occasionally, you want them to get browned in parts like below: 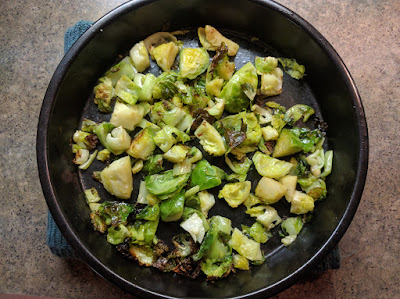 Add the brussels sprouts and cheddar to the potato/cauliflower mixture and stir.  This is delicious as is, but you can also finish this by cooking in a flat pan with some oil or butter. 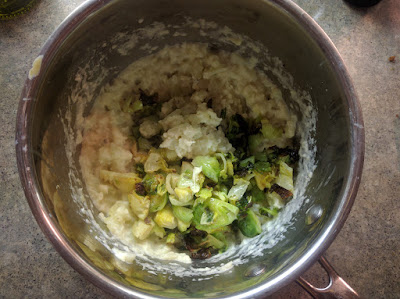 Melt butter or heat up oil in a small pan and let it heat up. Use a nonstick pan if you have it. Spread out the mashed mixture and let it sit over medium heat for a few minutes. With a spatula check underneath to make sure it isn't burning. What you want to do is try to flip it or just scrape/stir after cooking for a bit. It won't get super brown but it'll all come together more like a little pancake. 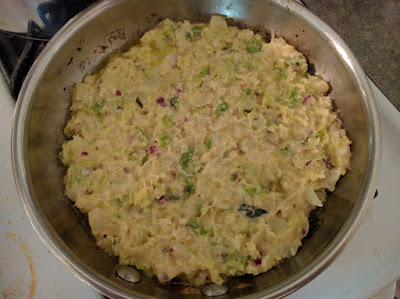 Serve with roasted meats or cooked sausages with some mustard on the side! 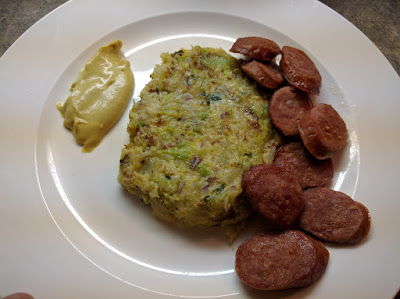 Posted by mostlybadfly at 8:25 AM