I have to admit, I have never made mole from scratch and I get asked about from time to time. Meaning "sauce" or "concoction", mole is a laborious dish, involving individual preparation of any combination of chiles, vegetables, spices, herbs, seeds, and nuts which are either toasted, fried, or charred.  These ingredients are then blended together and fried in lard or some other sort of fat and combined with meat broth to coomplete the final sauce.  Though they seem to involve an excessive amount of ingredients, they all meld together to create one unique sauce. I guess it is the complexity of mole that has held me back, but I want to change that.  I want to challenge myself and take the time it requires to make good food. I want to explore and keep learning new things in the kitchen, to really experience these the smells and the sounds of new procedures, and to keep honing my skills. 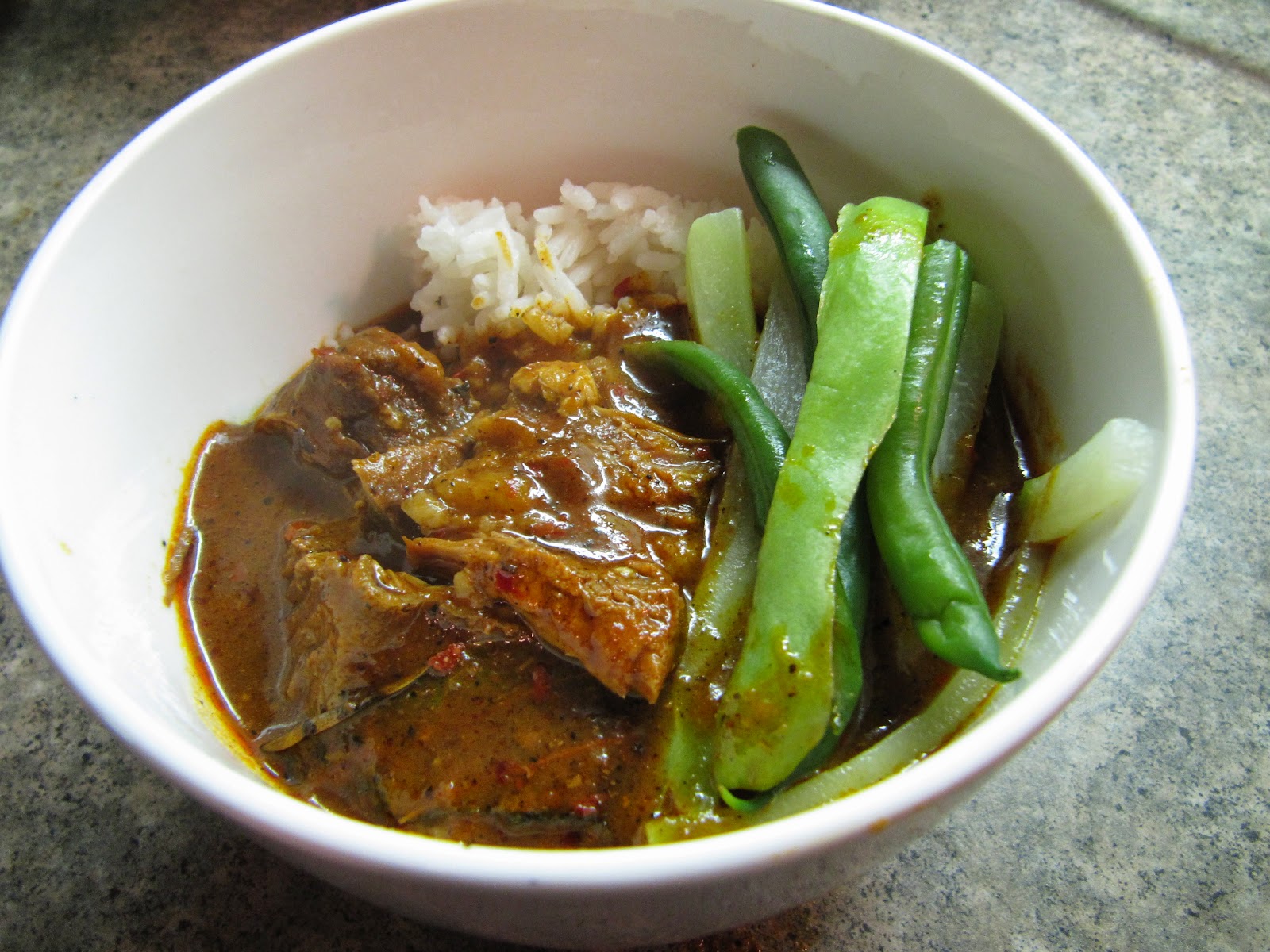 The recipe I chose to go with to begin my mole journey is from Diana Kennedy's The Art of Mexican Cooking. This book is more a collection of family favorite dishes from different regions of Mexico.  Many of these recipes I have never seen, and are specific to each cook. There are various mole recipes with their own variations and special touches. One of my other goals is to work through this book in it's entirety so I'm also glad to get started on that.

The dish I chose is chichilo negro or black beef stew. It is a darker sauce due to the charring of various of the components and it's traditional use of a black chile, the chilhuacle.  I was not able to find this chile, but Kennedy offers guajillos as an option of which there are plenty here. This mole was also interesting in that it uses primarily beef and some pork. 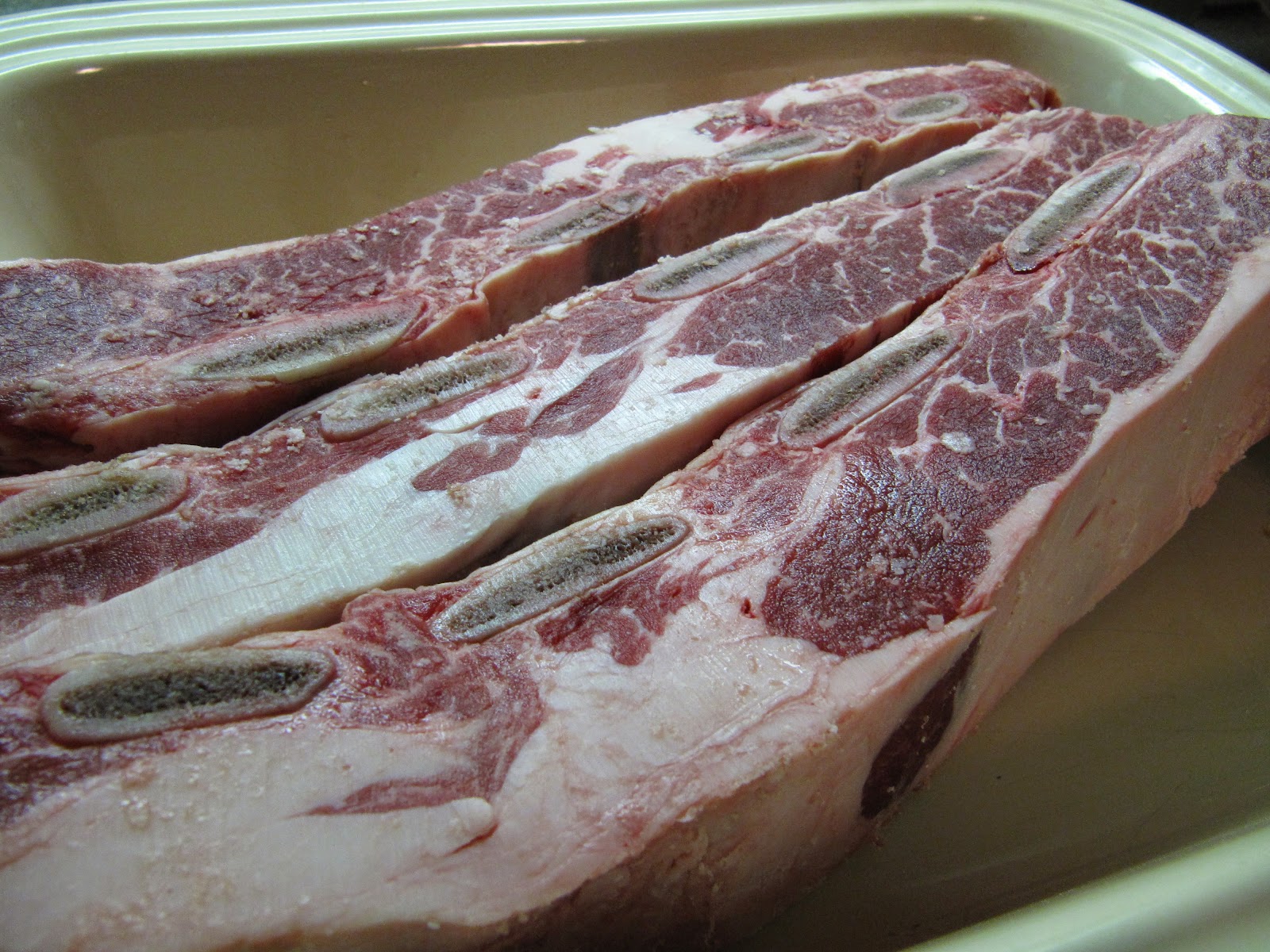 The cut of beef I used was beef short ribs.  The recipe called for either ribs or brisket.  I definitely want to give brisket a shot for the next time I make this. I also used about a pound of cubed pork shoulder meat.  I placed the beef and pork into a large pot with one chopped onion and 1 crushed clove of garlic.  I added just enough water to cover the meat and let it simmer for about 1 hour.  The resulting liquid will be used as the final component in the mole. 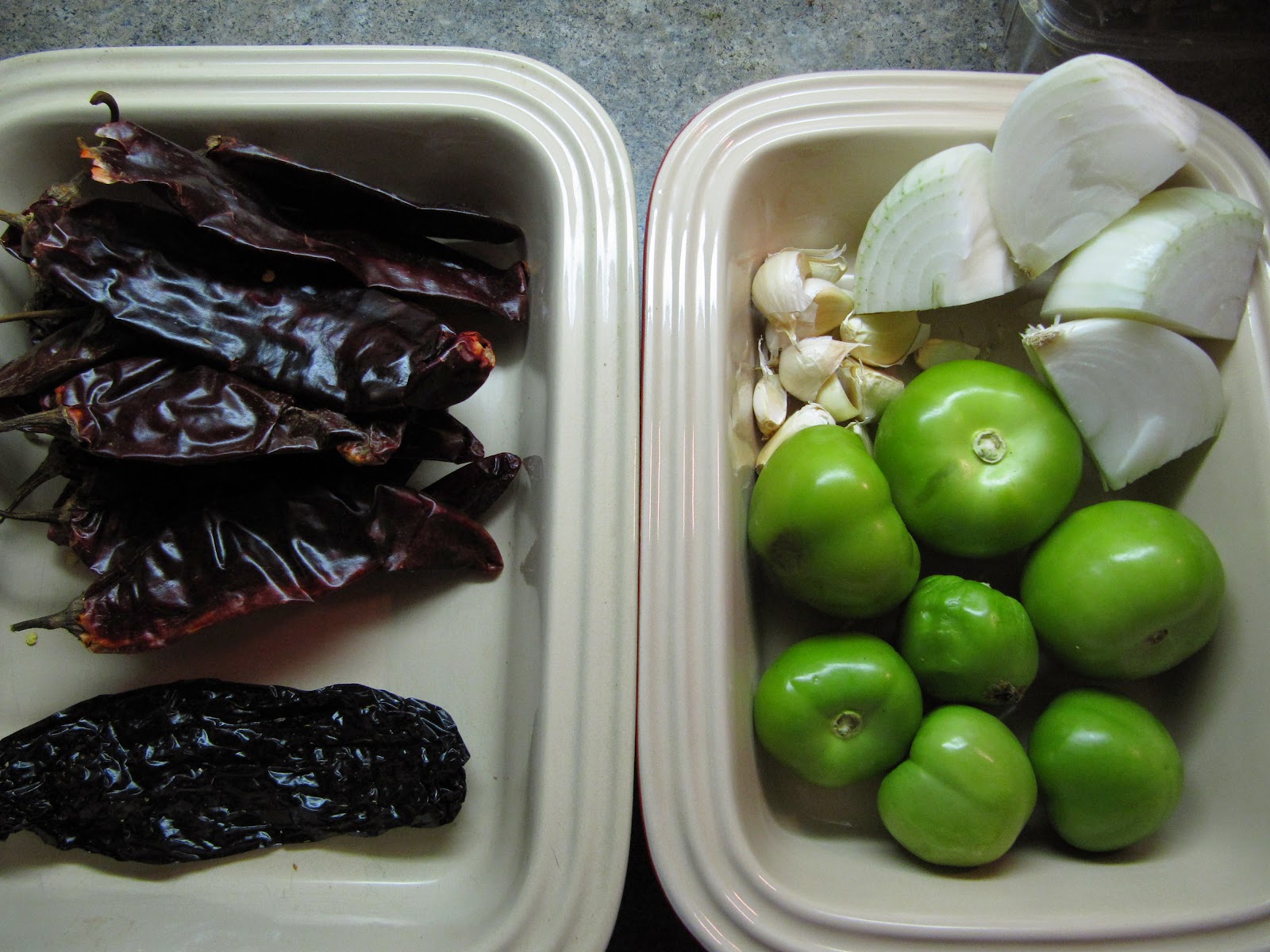 My first group of ingredients to prepare were the chile pasilla, chile guajillo, onion, tomatillos, and garlic.  I prepared the chiles by slicing lengthwise and removing all the seeds.  I saved the seeds as these become a component of the sauce itself.  19 dried chiles can be somewhat tedious but I found with each chile, the process became more familiar and seemed to go a bit more quickly. I heated up a wide skillet over high heat to begin toasting the chiles. 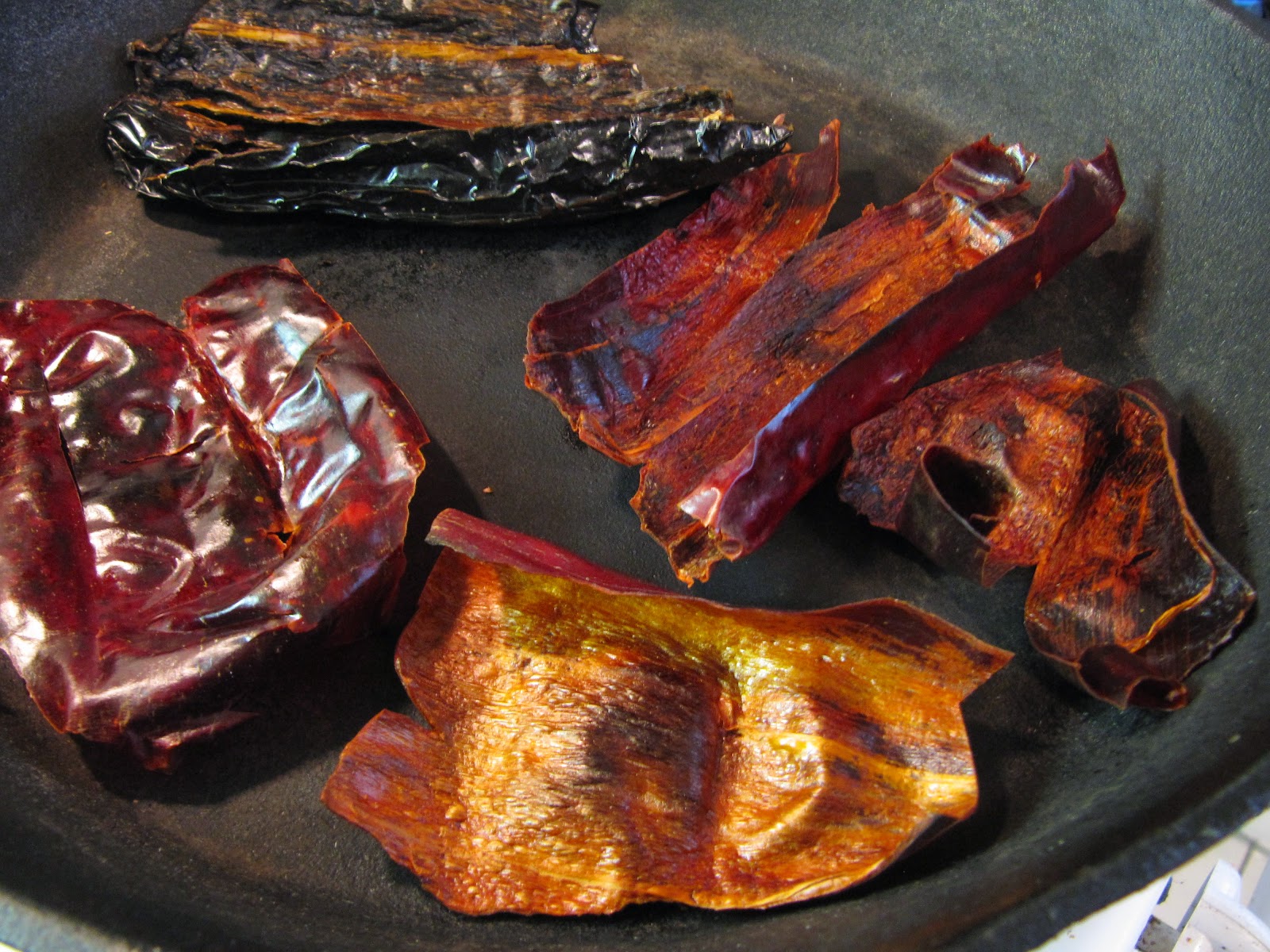 The smell of the chiles as they cooked on the skillet was amazing.  It is a smoky fruity aroma that is just every comforting and welcoming.  I tried to get a decent char on each side.  Actually, Kennedy suggests toasting each side of the guajillo until completely blackened.  I didn't take them this far unfortunately and will probably try getting them darker next time.  I would imagine this adds a bit more of a bitter and smoky flavor of the sauce. The chile in the back is the lone pasilla, the flesh got a bit more tobacco brown as it heated up in the skillet. 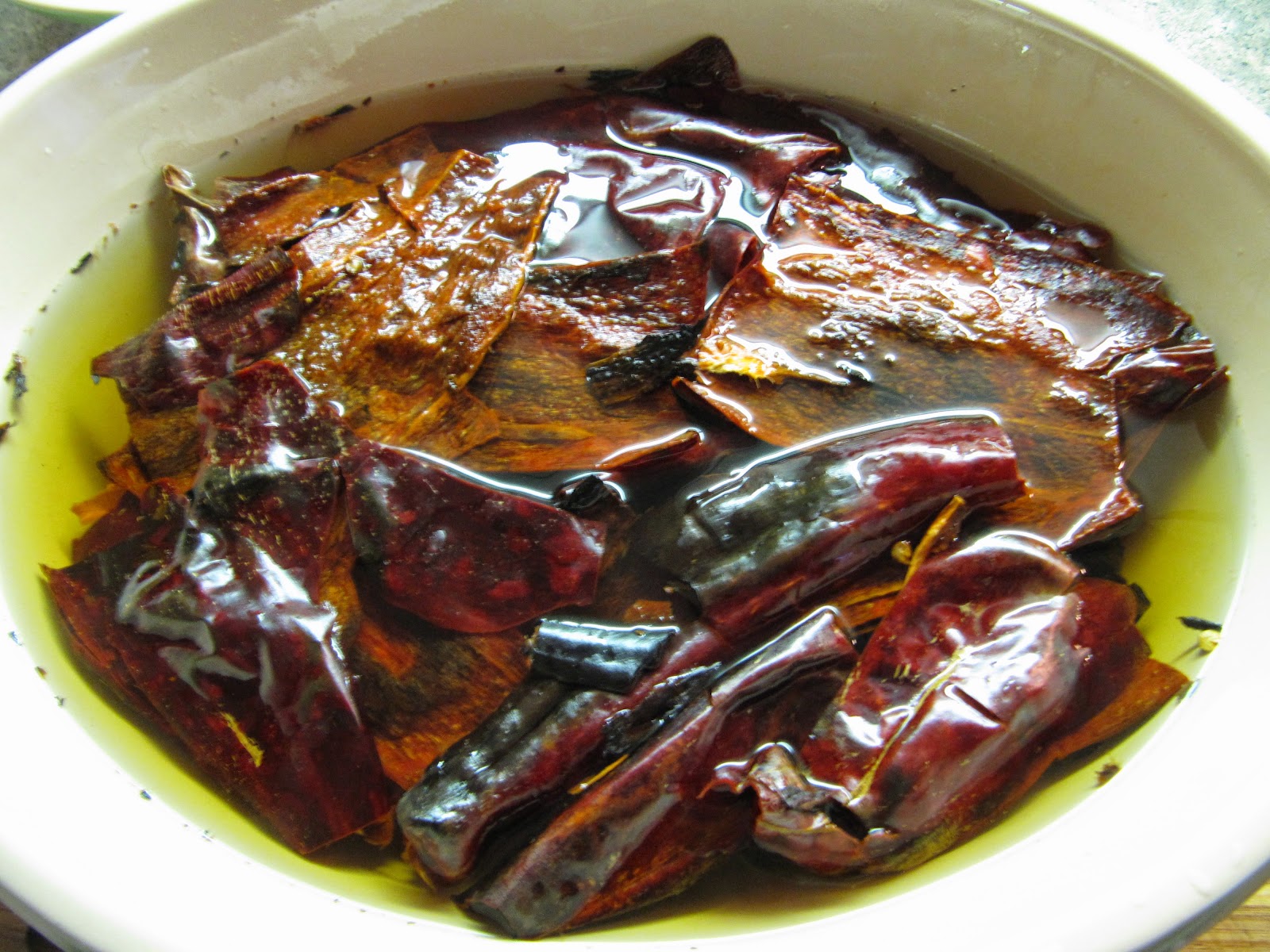 After removing from the chiles from the skillet, I rinsed them in cold water, then covered them in hot water for 15 min.  They'll soften during this time, so that they can be blended into the mole. 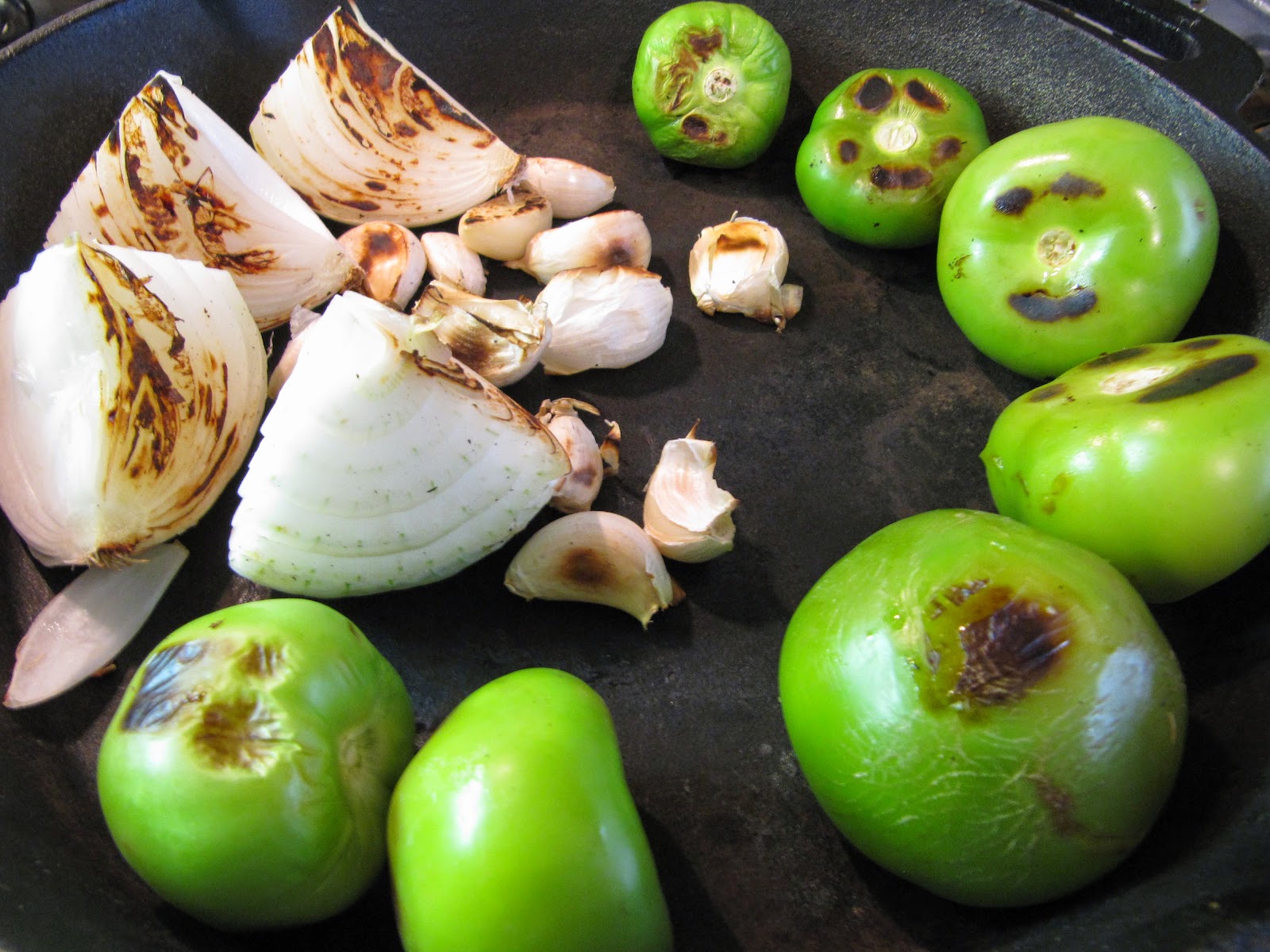 After I was done with the chiles, I added the onion, unpeeled garlic, and tomatillos to the dry skillet. As with the chiles, the goal was to get somewhat of a char on each side. I got a bit impatient during this step but eventually the vegetables got cooked through after several minutes of turning on the skillet. 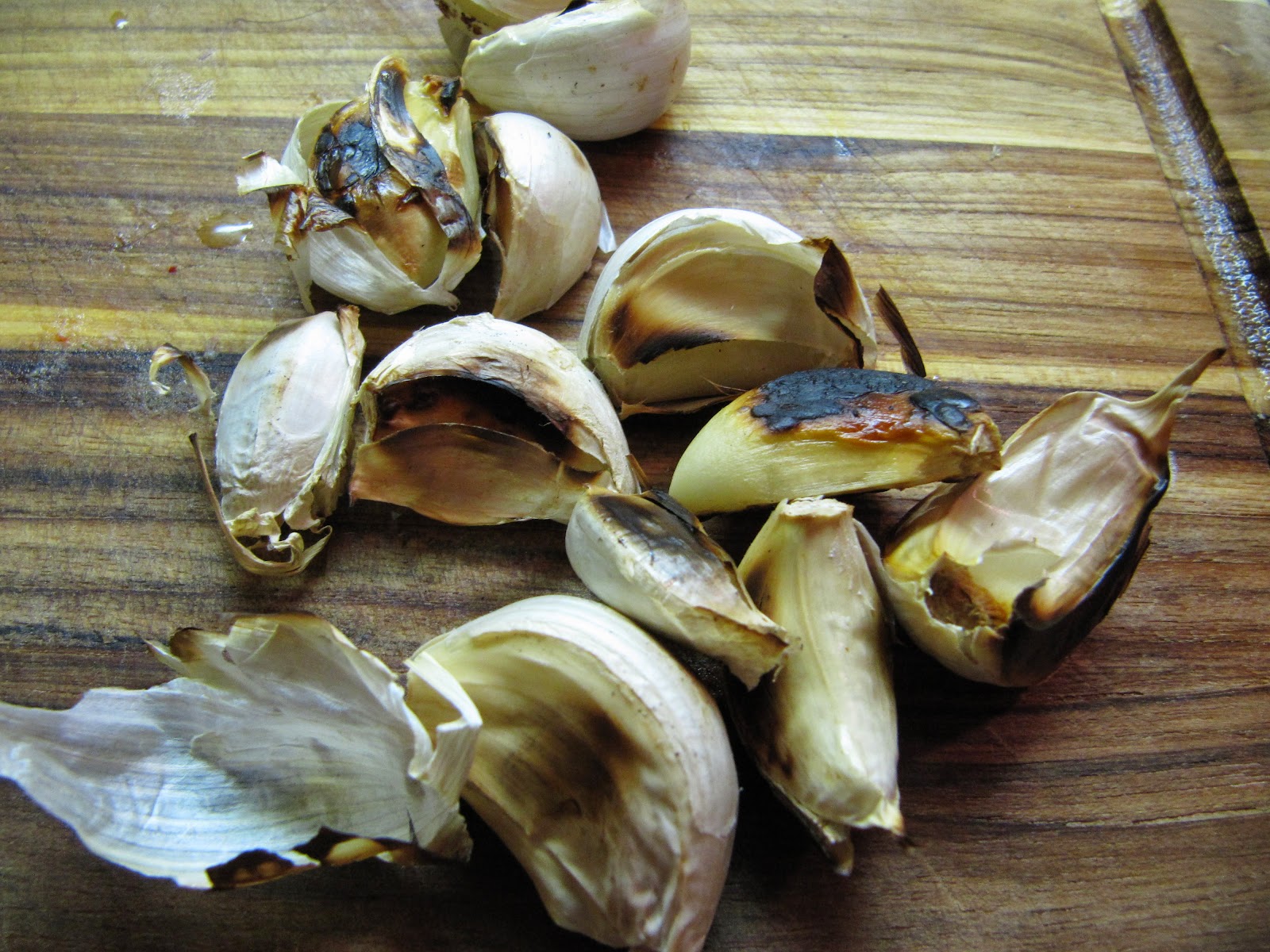 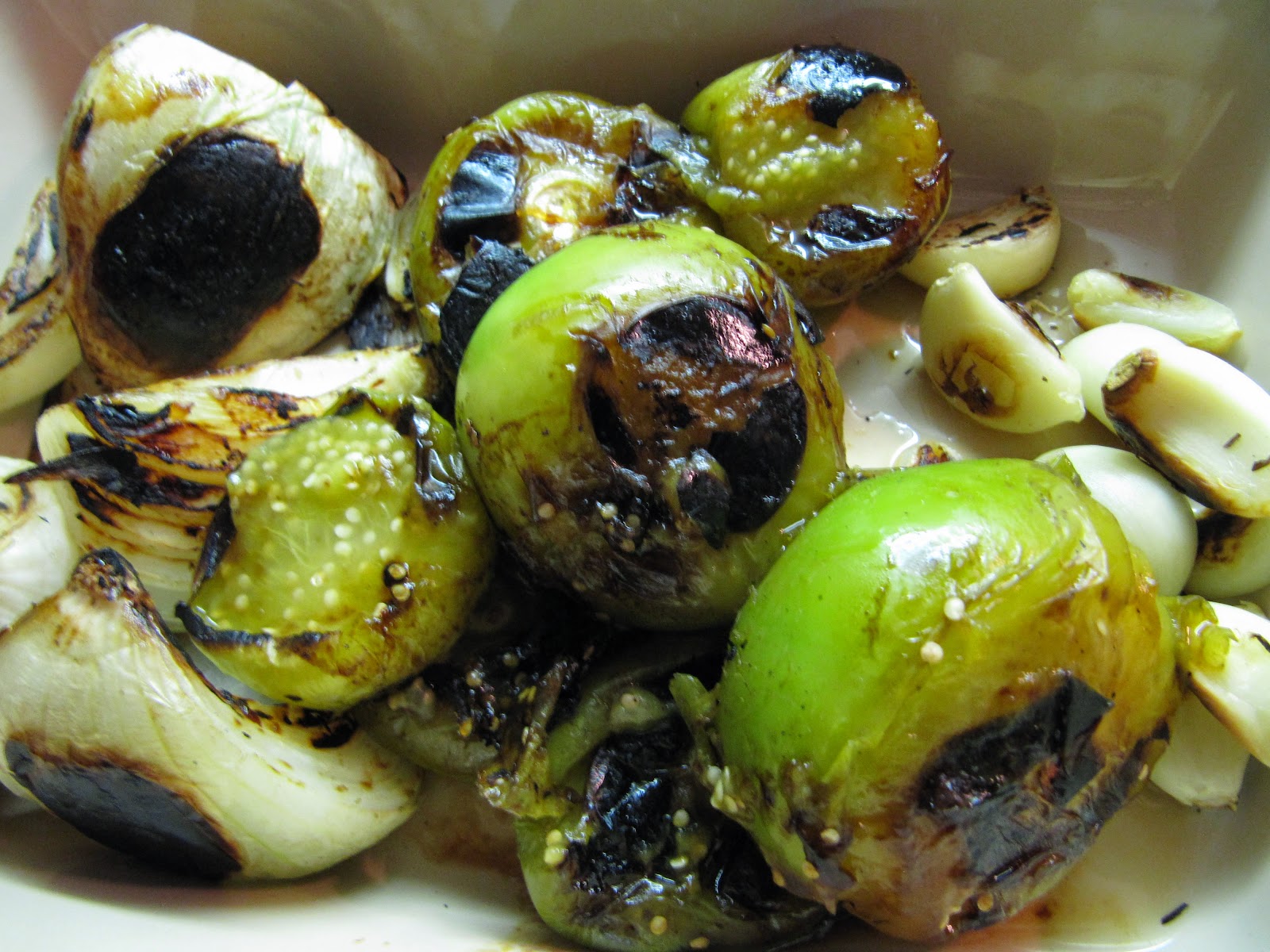 I first removed the garlic, notice how the skins get black in certain parts.  The clove just slips right out at this point. The garlic was sweet and sticky but still pungent, I kind of wanted to just eat one at that point.  The tomatillos onions softed and got blackened in places.  I wanted to let these go further but was getting some seriously smoke coming from the skillet.  Next time, I'm going to try a combination of cooking in the skillet on the stove top as well as in the broiler to get more of a consistent roast all around. 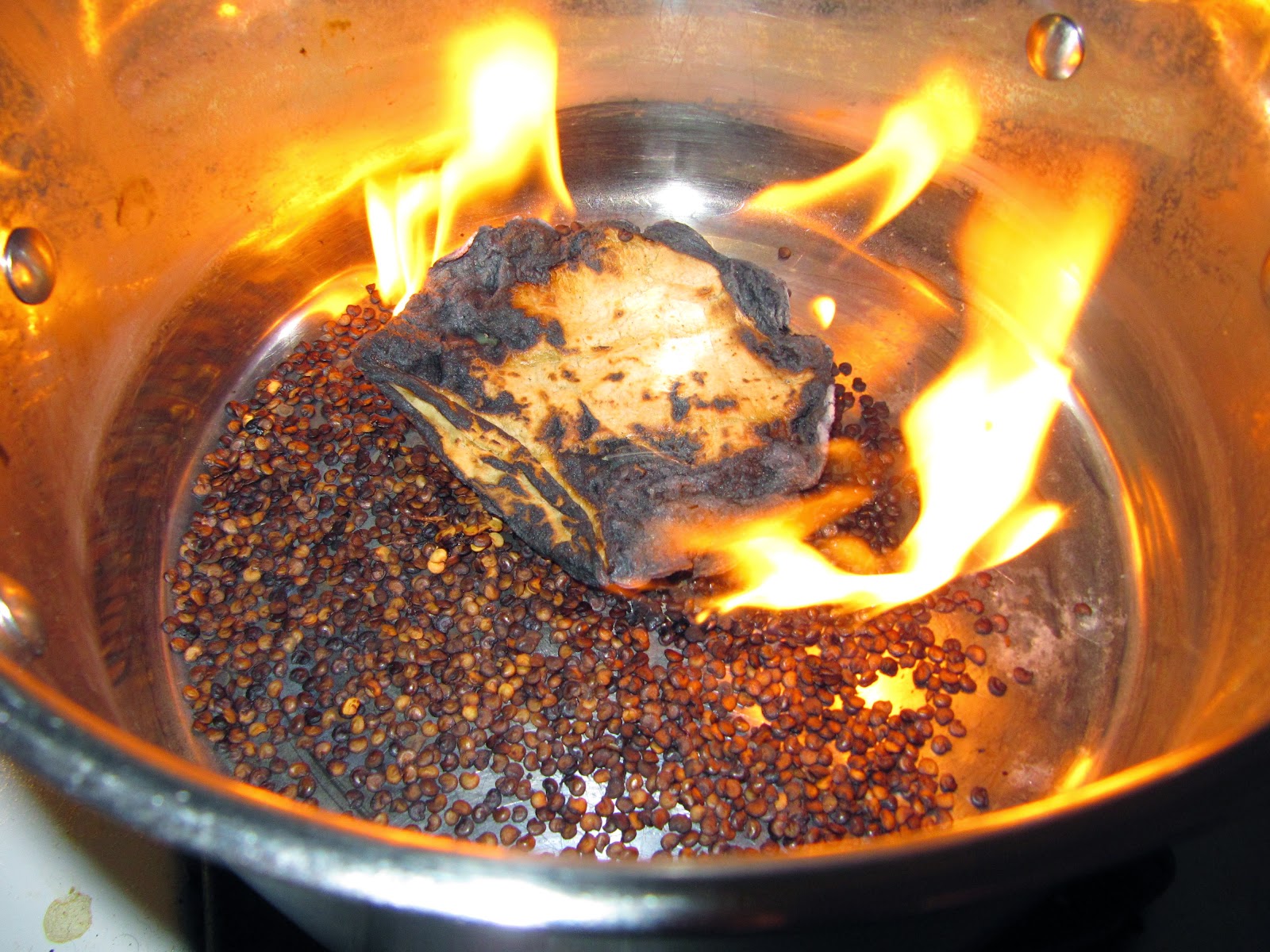 I saved the seeds from 1 pasilla and 18 guajillos.  It ultimately didn't seem like a lot considering how much seemed come out of each individual chile.  The recipe called for toasting these until black.  New smells came from the seeds as they cooked, nutty and sweet, it almost smelled like bread was baking. On the other burner, I began toasting a tortilla over an open flame.  As the recipe suggested, I let the tortilla burn until flaming and then tossed on top of the seeds in the pot. 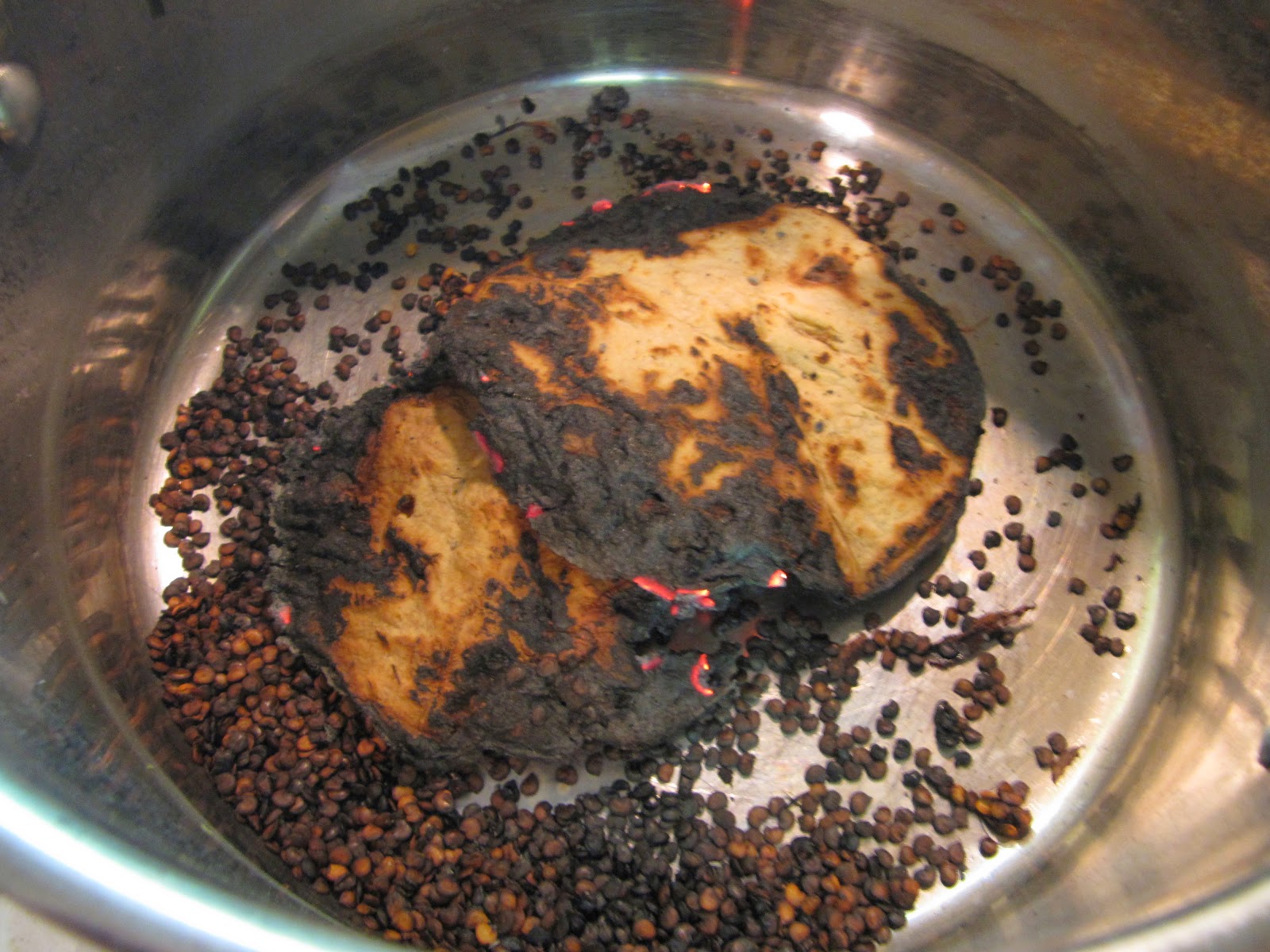 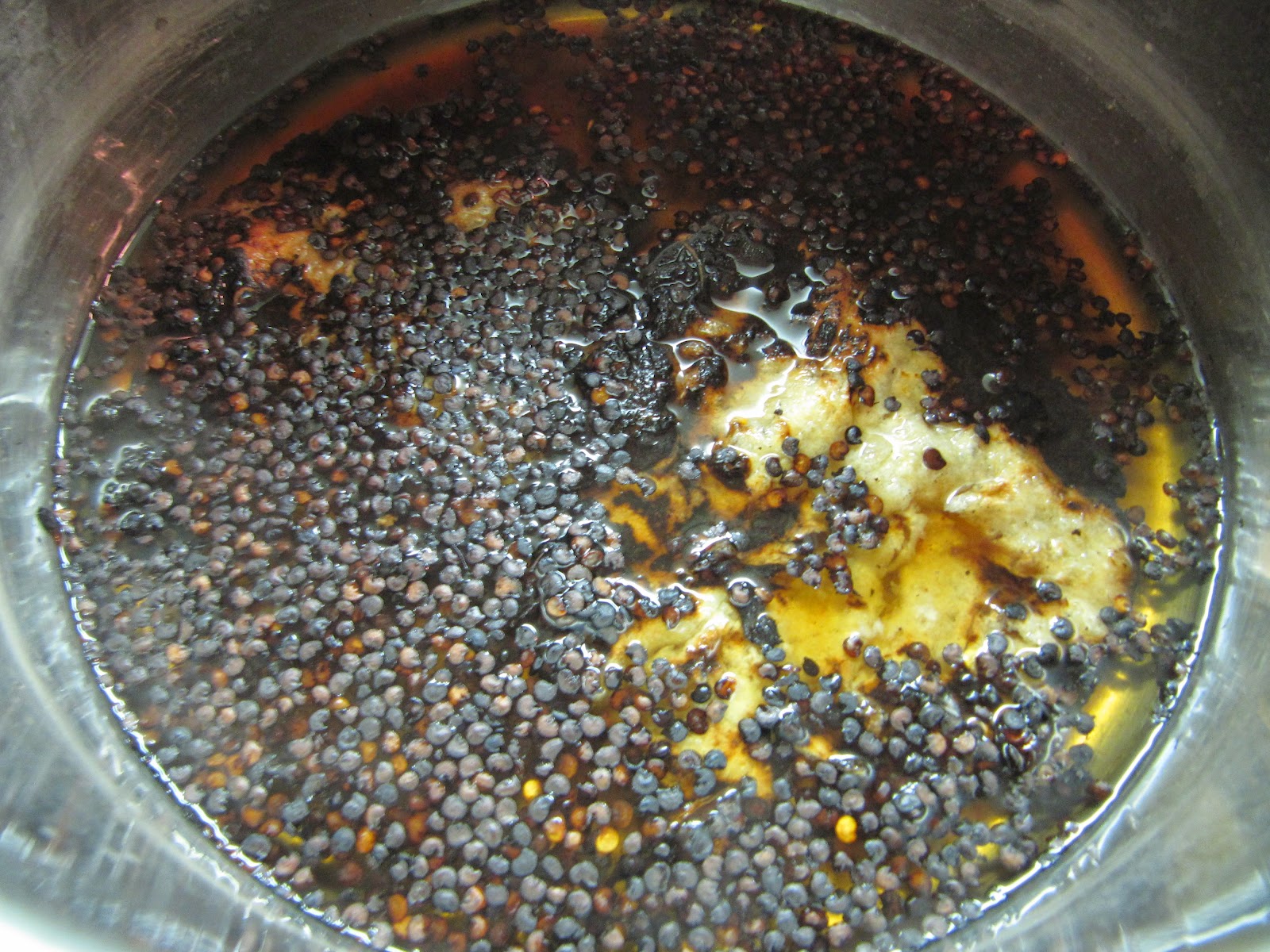 I did this with one more tortilla before dousing in cold water. I let this combination sit for about 5 minutes before draining. Considering that this particular mole doesn't have any other nuts, it seems that the chile seeds would serve this purpose.  I was curious to see how this flavor plays out in the final dish. This along with the other previously roasted ingredients are used to start the base for the mole. 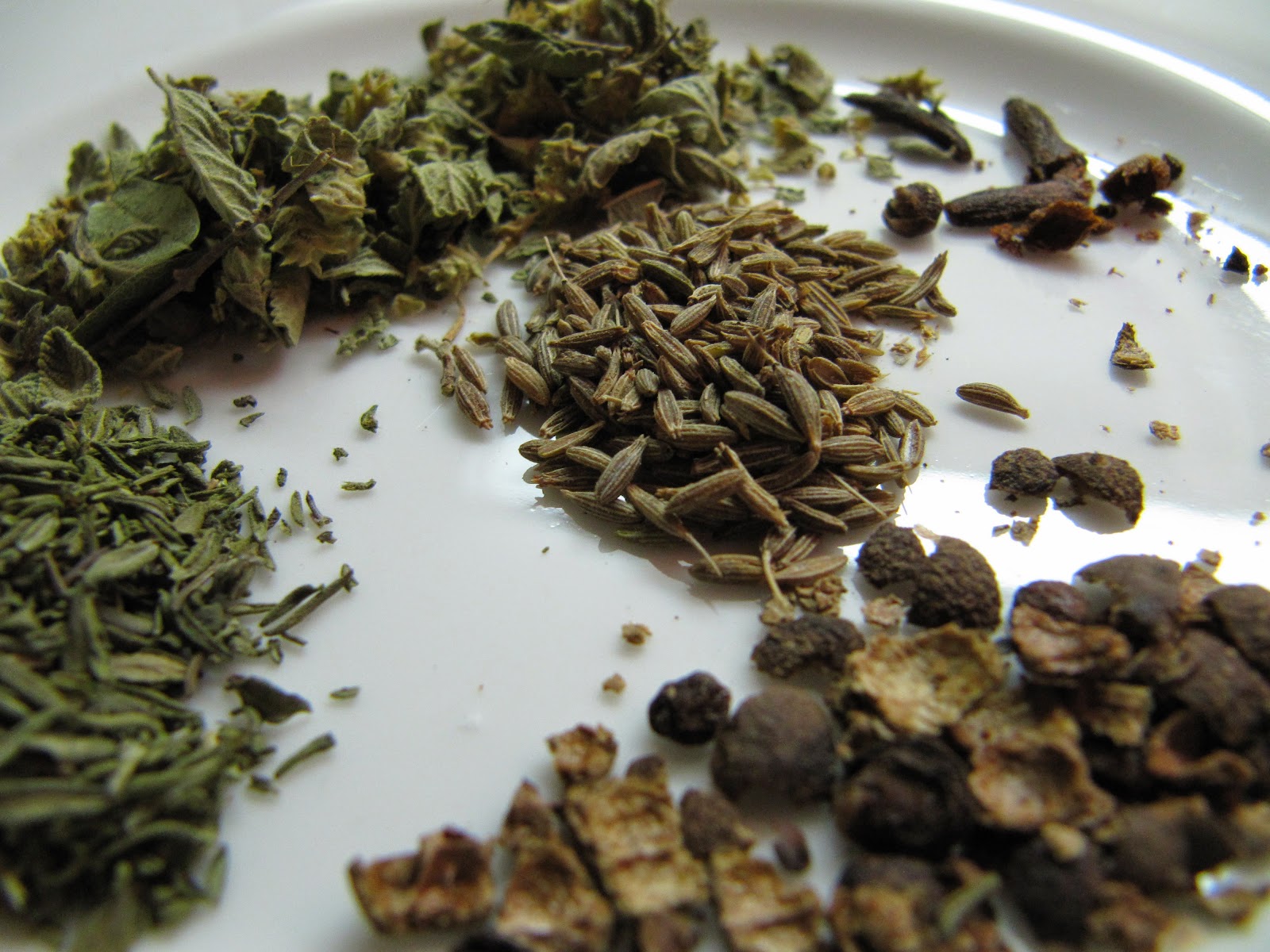 It was interesting to find out that there is a specific type of oregano used for this dish that is Oaxacan oregano.  Apparently this is different from Mexican oregano.  Thankfully, the recipe showed an alternate measurement for the latter.  The other spices and herbs I used were cumin seeds, cloves, allspice, and thyme. The recipe also called for marjoram, which I unfortunately didn't have at the time. 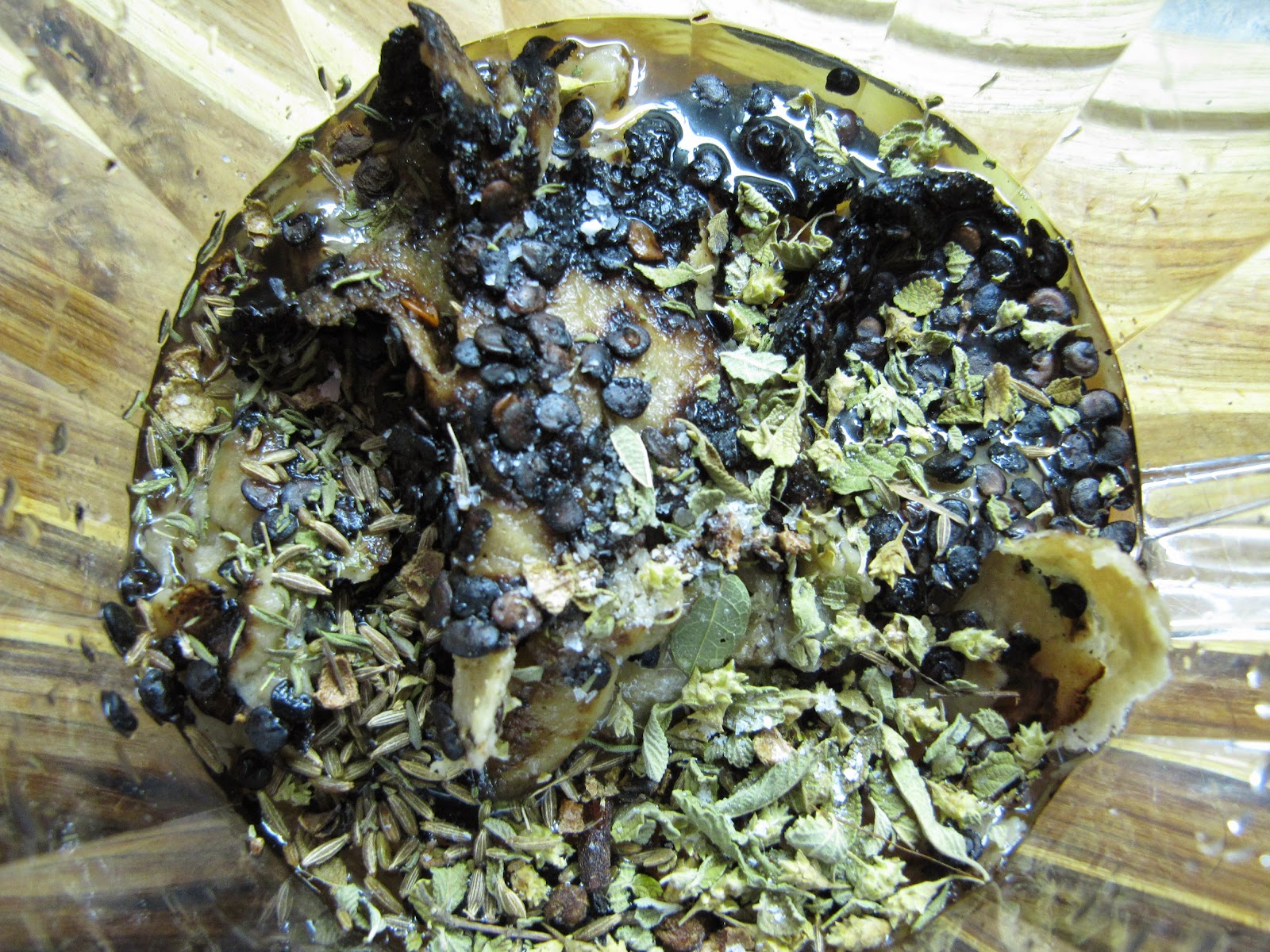 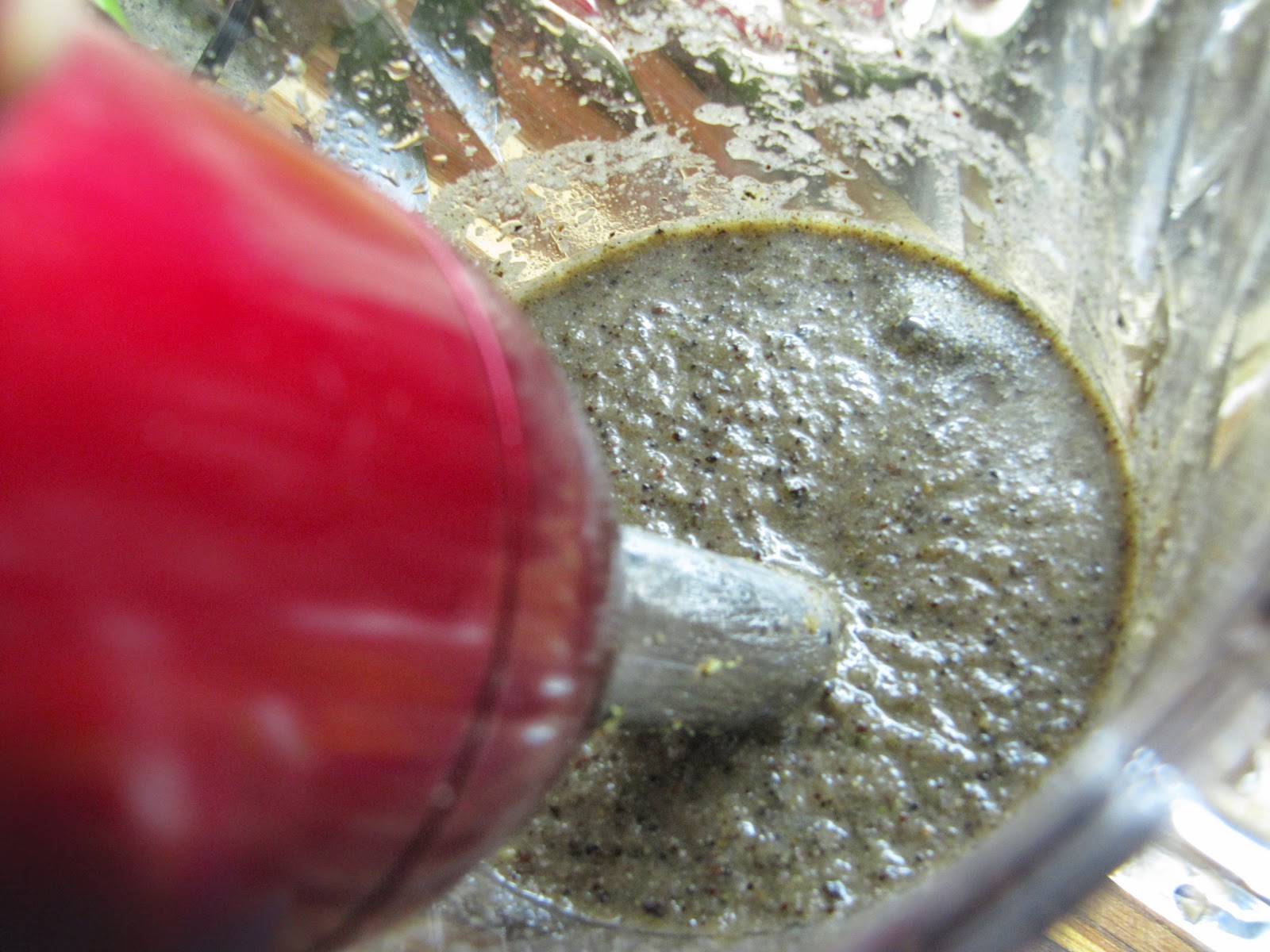 I added all the ingredients except for the chiles in a large pitcher and combined using a stick blender. It was interesting to see the sauce at this point.  It was gray, the color of the seeds and tortillas at the time really showed through. 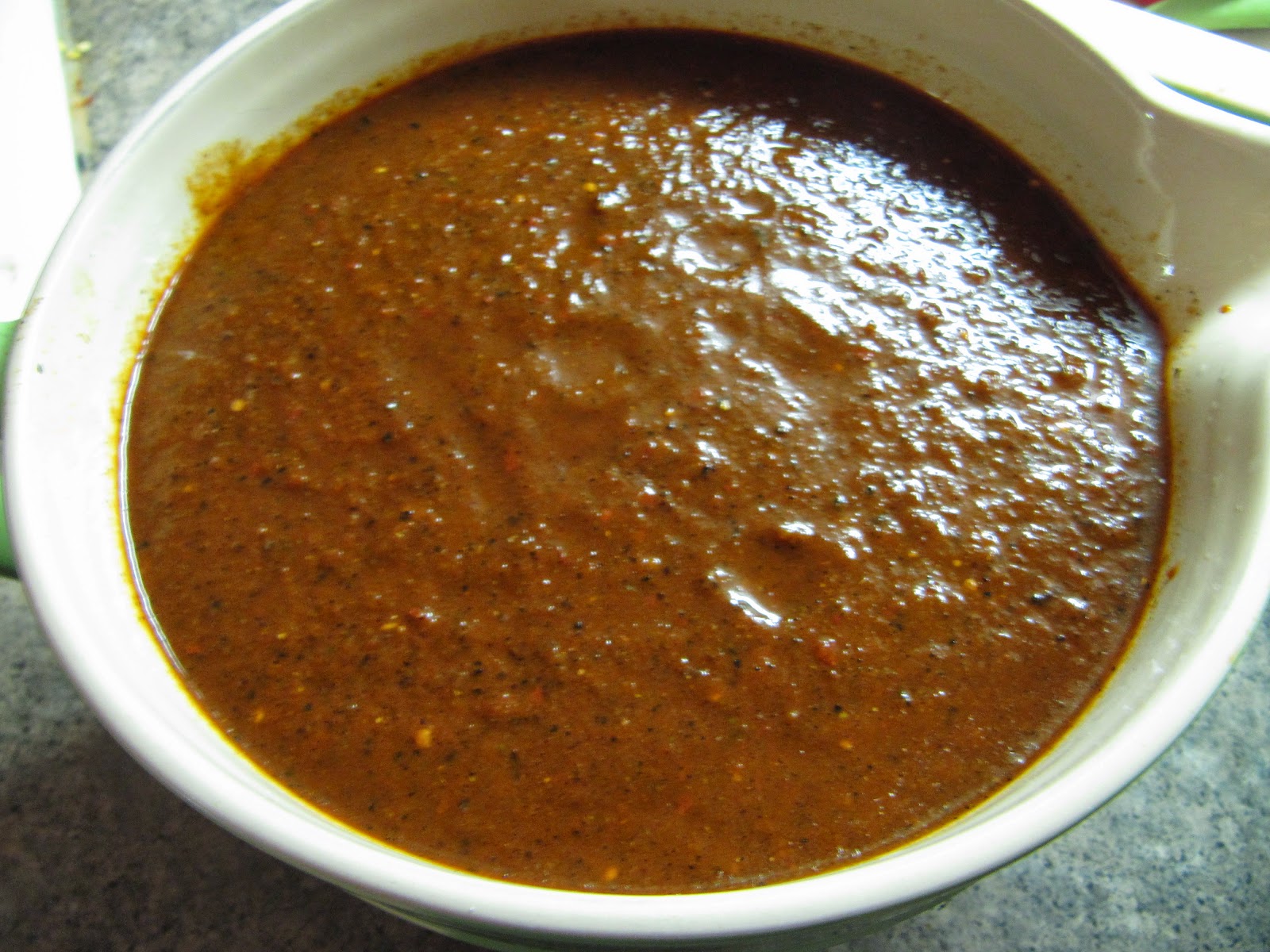 I added the chiles a few at a time and blending in between additions.  I think this is because makes it easier to really grind down the chiles and properly combine them into the rest of the mole.  To loosen the sauce as I blended it, I added a bit of broth from boiled chayote and green beans that are later added to the dish.  Once, all the ingredients were combined, I added a couple of tablespoons of lard to a large pot and fried the mole on high.  I scraped the bottom of the pan to make sure it wasn't sticking. After about 25 min the sauce thickens, and the flavors concentrate. 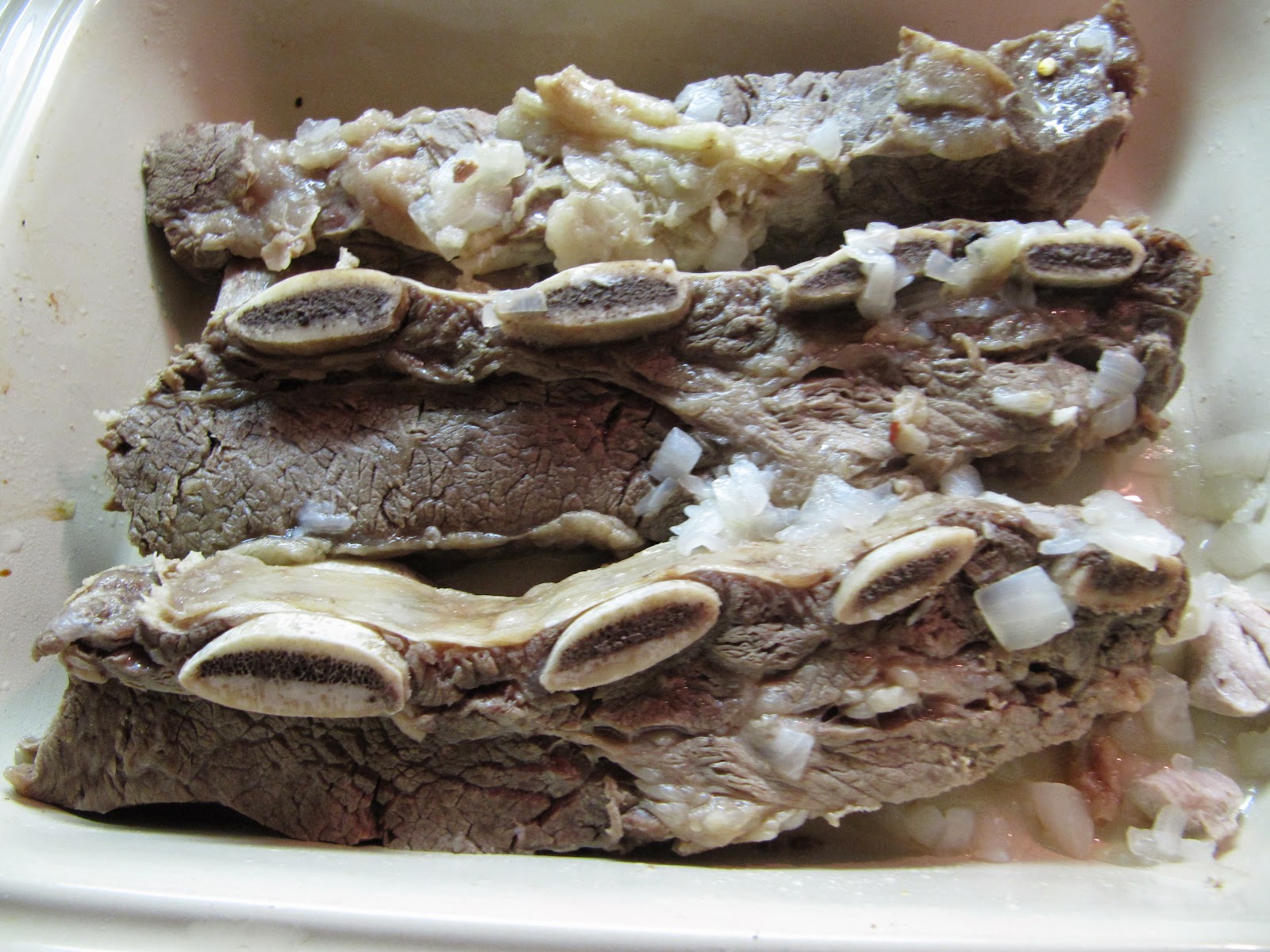 After simmering for about an hour, the beef was tender and the bones easily slid out.  I set these aside along with the pork to cool down.  I later chopped these into large chunks to be later added to the mole. 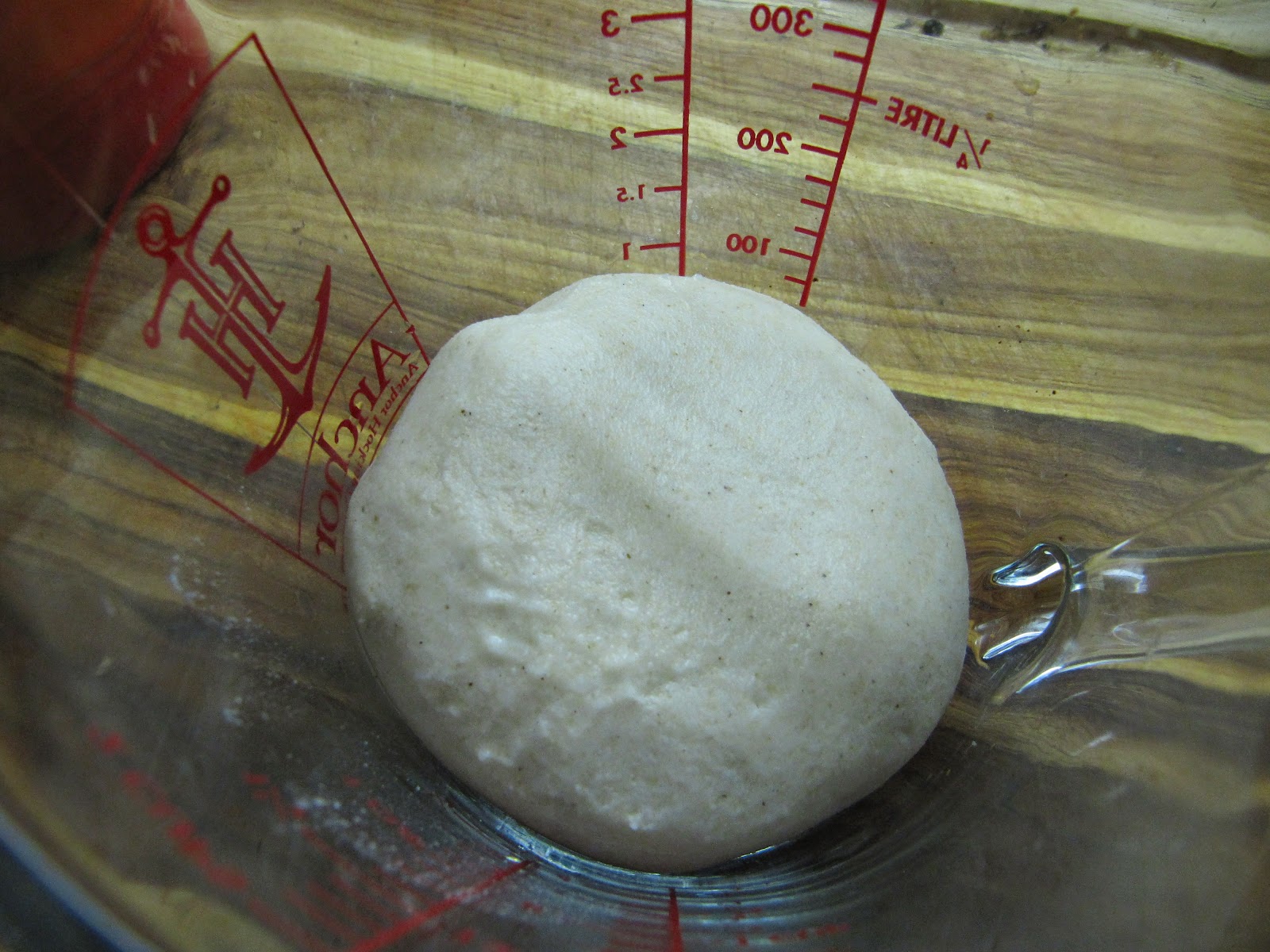 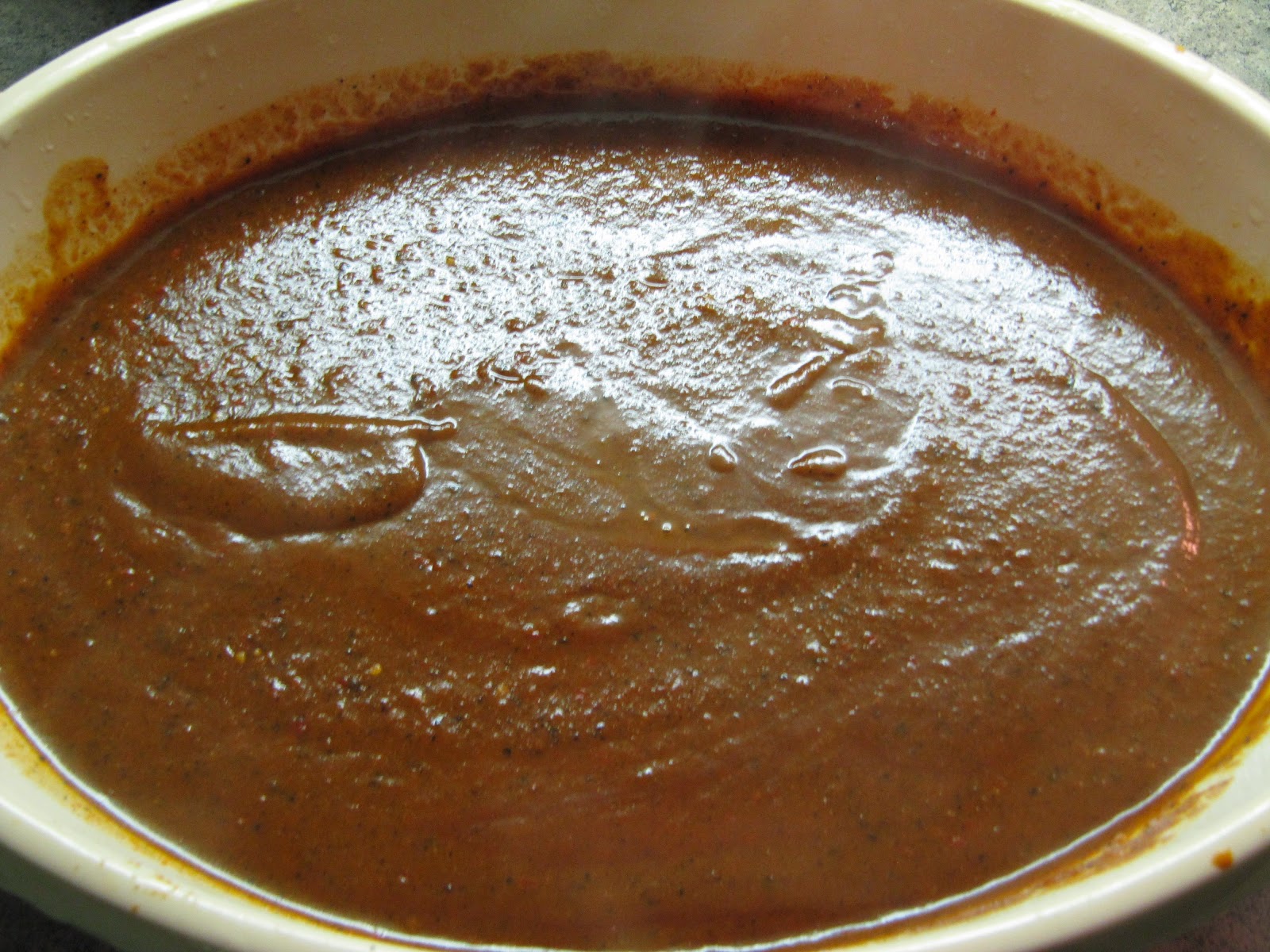 The second to last component of the dish is a ball of masa that is first blended with some of the beef broth, then added to the mole. The original recipe calls for masa made from cooking dried corn in water and powdered lime.  I hope to make this at some point, but for this recipe, I used masa harina mixed with water. The masa acts as a thickening agent while imparting some additional corn flavor.   After stirring in the masa and broth mixture, I cooked for 5 min, before adding in the remaining beef broth. I added the beef and pork that I chopped earlier, then simmered for an additional 15 minutes. 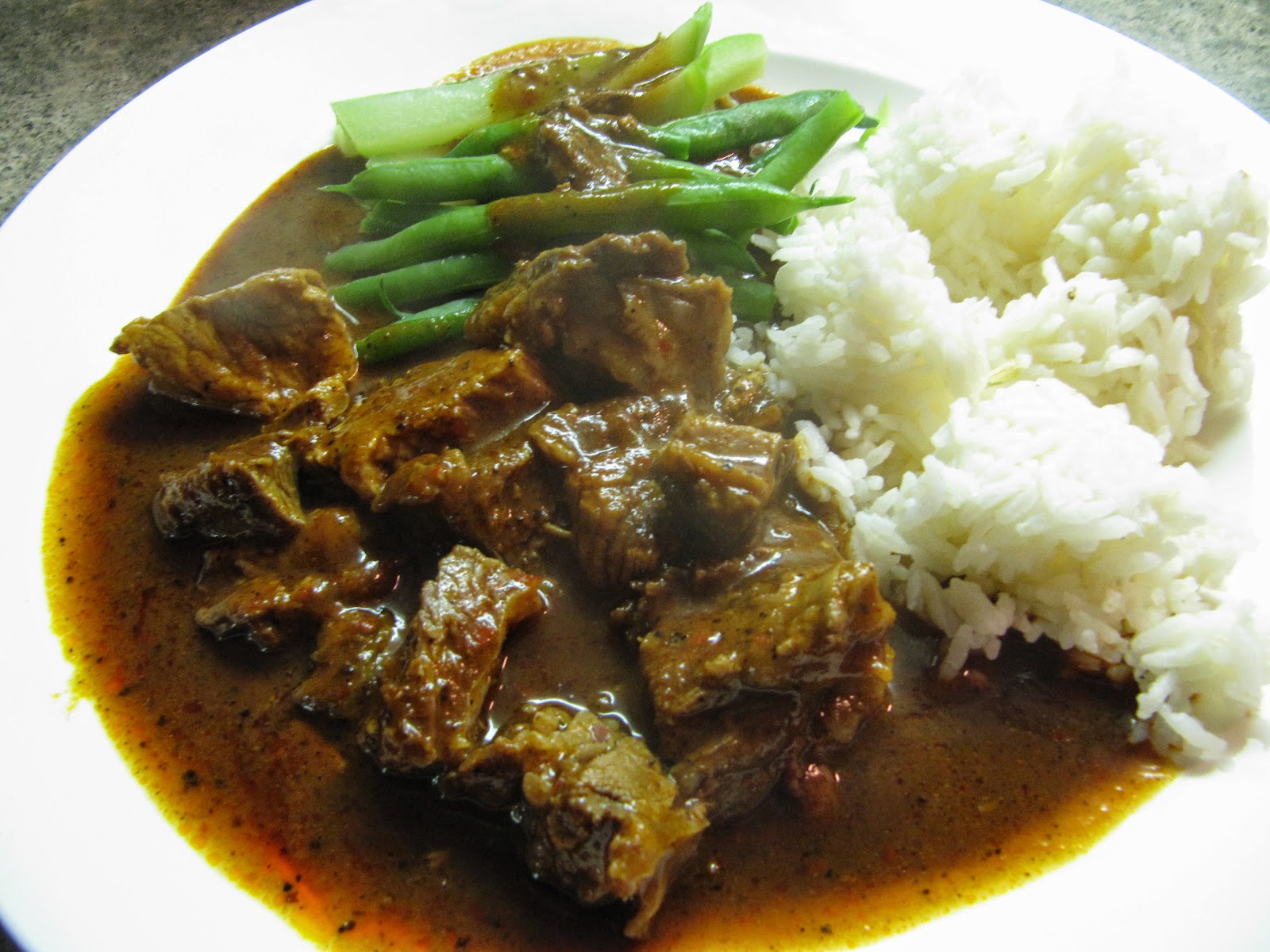 I served the chichilo negro with white rice that I cooked in vegetable broth along with boiled chayote and green beans.  The sauce was rich and had a nutty taste to it.  It wasn't as spicy as I had expected, but I still got a good touch of heat at the end.  The guajillos added some degree of sweetness that you sometimes expect in a mole as well. Overal it had a wonderful and complex taste.  I definitely got the roasted flavor, but can see that I needed to do a bit more charring during my preparation.

There were various components to this dish, and I felt it was a good introduction to the process involved in creating a mole. I felt that I learned some things I can't quite pinpoint, maybe it was the patience to prepare each individual ingredient.  I also feel a lot of it was tied to the smells that came from each ingredient, or the way the chiles changed texture when they were being toasted then again after being soaked. I was impressed with the flavor the seeds brought to the dish, it is something I never did before, but can definitely see using from now on. It is one of those things I kind of assumed I knew how it would go, until I actually tried it.
Posted by mostlybadfly at 11:33 PM