For this update I would like to return to a dish that holds a special place in my heart, pozole! To me this is a dish that represents home, family, comfort and just how good food can be. This is also one of the first things I learned how to make from my mom.

The word pozole in Mexican Spanish is refers to hominy. Hominy in the US is most commonly found ground in grits. In Mexico, pozole is kept whole and serves as the basis for the dish of the same name. Pozole the dish is a soup which consists of hominy and pork and can vary in color from red to green to clear depending on the whether or not the broth is flavored with chiles and spices. The version I grew up with was red which gets its color from guajillo chiles. 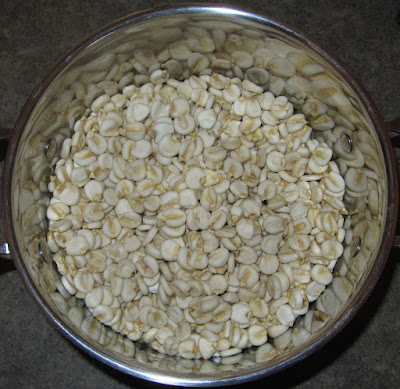 One of the most interesting aspects of pozole is the garnishes. Alongside the soup itself you have an option of adding as much shredded cabbage, sliced radishes, diced onion, cilantro, Mexican oregano and broken up tostada pieces as you like. The fresh ingredients contrast with the hot soup and add texture. The closest comparison I can think of is Vietnamese pho. Both soups are actually eaten in a similar context, usually being the breakfast/brunch meal shared with loved ones.

The broth for pozole is primarily a pork broth but you get a certain also get a certain corn flavor from the hominy itself. To begin I used a pork shoulder with as much fat trimmed off as possible. This fat can be used to crisp up in the oven as an additional garnish if you so choose. I placed the pork shoulder in a 400 degree oven and roasted for about a half hour before placing in a stock pot and covering with water. I added a half an onion and a few cloves of garlic and simmered on low for about 3 hours until the pork meat is tender. I removed the pork meat to cool for cutting into chunks and got to work on the hominy. 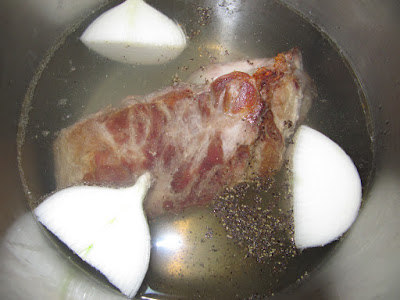 For the pozole part of the dish I decided to use dried hominy that I picked up at the local Mexican grocery store. The suggested preparation for dried hominy is to let it sit overnight in cold water then to boil in the broth slowly for about 2 hours. I usually use canned hominy but I found that boiling the dried hominy directly in the broth gives a thicker broth with more corn flavor. Either option gives great results. 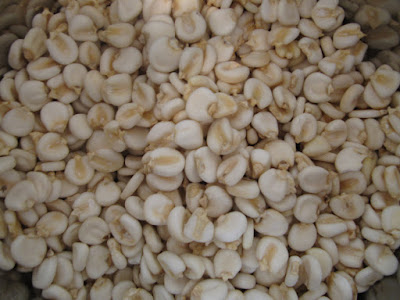 While the hominy was boiling I took off the stems and shook out the seeds from 10 guajillo chiles. I placed the chiles in a bowl and I used some of the hot pork broth to cover them to soften for 15 minutes or so. 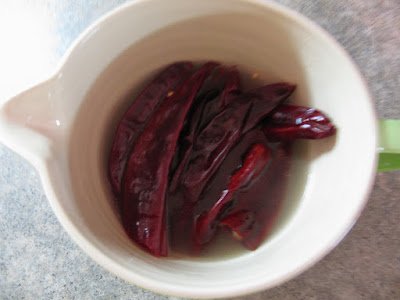 I moved the chiles to a blender and added a couple of cloves of garlic, Mexican oregano, cumin, bay leaves, salt and pepper. I added a bit of the broth and blended for a few minutes until all the ingredients are fully ground. The result is a deep red sauce that can be added directly to the soup. 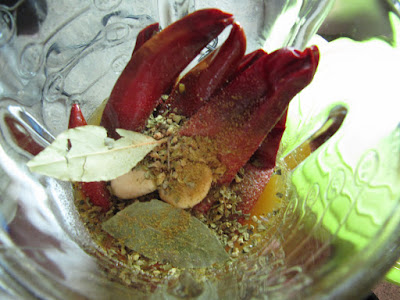 I added the guajillo mixture along with the chunks of pork back into the pot with the hominy during the last half hour of cooking so that all the flavors could come together. While the soup finished cooking I shredded cabbage, thinly sliced radishes, diced onions and chopped cilantro to prepare my dish of garnishes for people to add what they like. I also had tostadas on hand to break into the soup prior to eating. 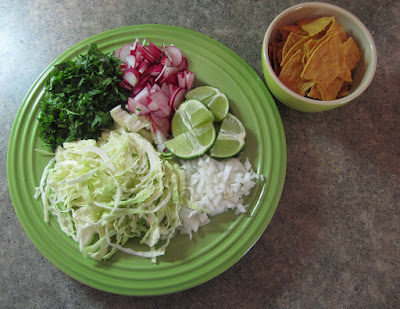 This soup to me is addictive. The rich pork and corn flavor really came through and the soup thickened a bit as the hominy boiled away. The chiles provided a deep red color, spice and a certain earthy depth of flavor that really makes this version stand out. I usually like to garnish with a bit of everything, cabbage being my personal favorite. 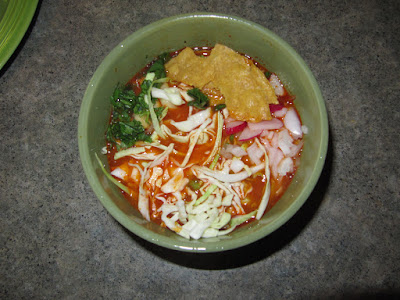 This dish, like many traditional homestyle Mexican dishes are really made by using all the senses and sort of winging it. It is really difficult to pinpoint exact measurements, but I have made an attempt at a recipe. If you end up trying this, I’d love to hear your thoughts! 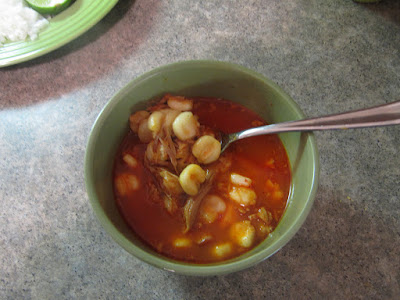 1.) Remove the excess fat from a pork shoulder roast and place in a 400 degree oven for 30 minutes.
2.) Remove the pork from the oven, place in a stock pot and add enough water to just cover the pork. Add half an onion (no need to chop it up) and 2 cloves of garlic and simmer on low for 3 hours.
2.) Remove the pork from the stock pot and set aside to cool for cutting into bit sized chunks. Discard the onion and garlic. Place the guajillo in a bowl and cover with a few ladles of hot pork broth; let this sit for at least 15minutes until soft.
3.) In a blender combine the guajillo chiles, cumin, Mexican oregano, bay leaves, salt and pepper.
4.) Blend for a few minutes to assure that the chiles are properly ground. Set aside.
5.) If using canned hominy add this to the pot of pork broth. To this add the chunks of pork meat and guajillo chile mixture. Simmer on medium for about 30 minutes so that all flavors come together.
6.) If using dried hominy, simmer on low in the pork broth for about two hours, then add the pork and guajillo mixture. Simmer on medium for an additional 30 minutes so that all the flavors come together.
7.) Serve the finished soup in a large bowl and add garnish of your choosing.

Posted by Anonymous at 9:04 PM