So this Christmas I was very lucky and honored to have spent time with Drew and his family. His parents were generous enough to give us a kitchenaid stand mixer as our Christmas present. I all but jumped for joy, reliving that feeling you get as a child when you open the big Christmas present. This thing is massive, a 5.5 qt professional mixer in red, even a few days later I can't help but stare at it on the counter. 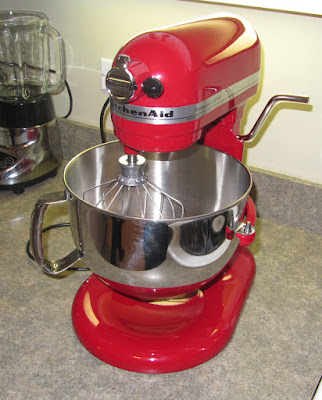 I premiered the mixer by making whipped potatoes for Christmas dinner which went over well, everyone loved them. Basically hot boiled potatoes, butter, sour cream, milk and garlic whipped up with the paddle attachment.

Yesterday, since I had more time I decided to make a first attempt at baking a loaf of bread. For this I used a basic bread dough recipe of 4 cups of bread flour, 1.5 cups water, 1 tsp dry active yeast and two tsp salt. To this I added 2 tsp of olive oil and a few cloves of garlic to give the bread some added flavor. I added all these ingredients at once to the mixer, making sure the yeast dissolved into the water. Using the hook attachment I mixed all the ingredients together for a good 15 minutes until the dough formed into a smooth ball.

I let the dough rise for about an hour until it doubled in size. I then took the dough and kneaded a bit to take out some gas and redistribute the yeast. I rolled the dough into a boule and placed it into an enameled dutch oven that was brushed with olive oil. I got the idea to use the dutch oven from reading Ratio: The Simple Codes Behind the Craft of Everday Cooking by Michael Ruhlman. In it he explains that baking in a dutch oven with the lid on allows for steam to circulate and makes for a perfect bread crust. I let the dough proof in the dutch oven for another hour and a half before baking. 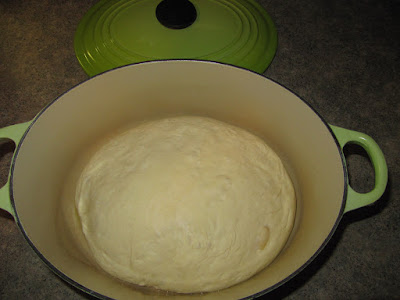 Before placing in the oven cut a few slits on the top of the bread, brushed with olive oil and sprinkled with salt. I also decided to place a few cloves of garlic into the slits I cut out so they can roast into the bread. I placed the lid on the dutch oven and placed in a preheated 450 degree oven and baked covered for a half hour, then removed the lid and baked for another 15 minutes or so. Once out of the oven the crust on the bread was perfect. The bread fell right out of the dutch oven and was ready to serve.

The bread was delicious and I was very excited about how easy it was to make. We ate the bread as is, just warm out of the oven without any butter, there is something quite enjoyable about basic warm bread. This will definitely be my go to recipe for breadmaking, give it a try! 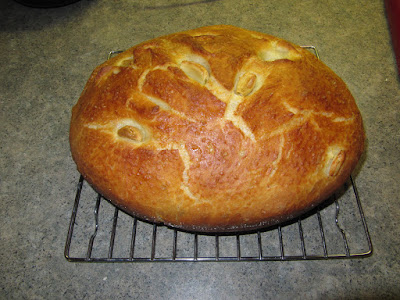