The other day I picked up some beautiful pork chops from a local butcher.  What instantly came to mind was a simple pan seared pork chop with applesauce on the side.  To me this is a classic diner dish, one of those blue plate specials that made it into the permanent "special dinners" section of many greek-owned family diners you see in Chicago.  I made a twist on this classic by creating a savory sweet apple chutney to go with a ginger-garlic pork chop.  As an additional side I made roasted carrots. 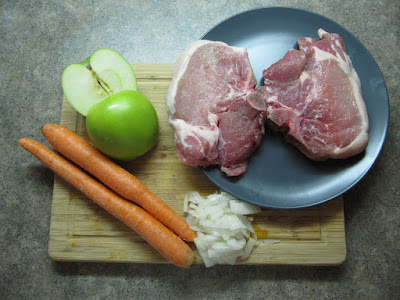 I began by washing a few carrots and cutting into thin slices.  I arranged the carrot slices in a small baking dish, drizzled with olive oil and added salt and pepper.  I placed the carrots in a 375 degree oven for about 20 minutes. 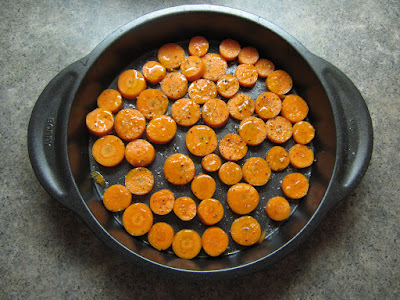 I chose to keep the pork chop simple by searing it and finishing it in the oven.  I brushed the pork chops with olive oil and sprinkled with salt and pepper.  I placed the pork chops in a very hot cast iron skillet, flipping after a couple of minutes and placed in a 375 degree oven for about 5 more minutes until the pork was cooked through and slightly pink in the middle.  Once out of the oven, I added a pad of butter to the pan, grated ginger, garlic, and serrano chile and spooned the combination over the pork chops, making sure to cover it in all the flavors.  I set the pork chop to the side.

In the same pan that I used to cook the pork chop on medium heat, I added thinly sliced onion and a couple of cups of granny smith apples, cut into chunks.  I used the left over garlic, ginger, chile and porky bits in the pan to flavor the apples.  After sauteeing for a couple of minutes I deglazed the pan with a shot of whisky to pick up all the flavors and have everything come together.  I added to the apples cinnamon, cardomom and brown sugar to sweeten them up a bit.  I didn't cook the apples too long because I wanted them to maintain some texture. 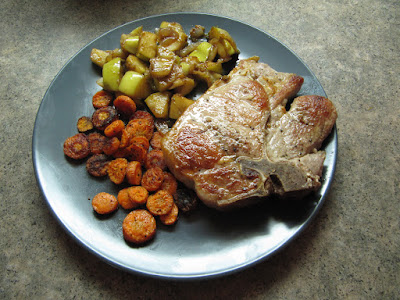 This dinner tasted very much like the classic pork chop and applesauce dinner but with a few changes to keep it interesting and to spice it up a bit.  This is a relatively quick and easy dinner to make and various vegetables can be substituted for the carrots, but I would not replace the applesauce.

Posted by Anonymous at 8:47 AM