A friend dropped off a good deal of these huge great looking serranos and I thought that green coconut curry would be the perfect way to use a few of them.  Now, I’m not expert on curries or the exact spices that are involved, I have a general idea and I’ve been trying to approximate the flavor as much as possible.  I feel that this version has been the most successful so far.

To start I made a green sauce by throwing tons of cilantro, spring onion tops, serrano chiles, poblanos, garlic and ginger into a food processer until it formed a paste.  I then added tumeric, coriander, cumin, garam masala, salt, pepper and a bit of water to complete the green sauce.

In a hot pan I melted some ghee and sautéed some onion and coconut flakes.  I added coconut flakes early on so they would toast and get a bit caramelized.  This added enough sweetness to the dish to avoid adding sugar.  To this I added diced potatoes and the green sauce.  Once the potatoes softened I added some coconut milk and my frozen peas.  The last step was adding the shrimp.  I continued to cook the entire dish until the shrimp got pink and cooked through. 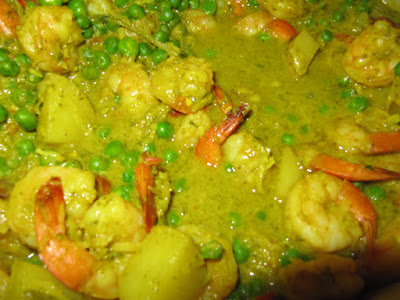 The pungent green sauce with the cool sweetness of coconut milk worked great together and really went well with the shrimp.  I served with some basmati rice on the side to soak up the delicious sauce. 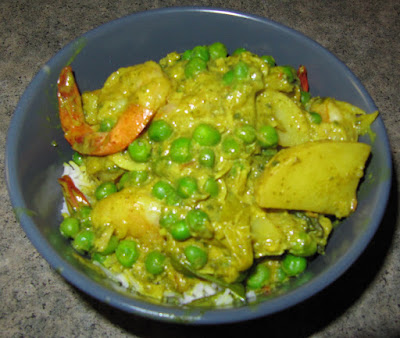 Overall, I really enjoyed the dish, it makes for a good meal.  I think I would’ve preferred it a bit more spice and tang to the sauce so for next time I’m going to add more chiles and a bit of lime to the sauce.
Posted by mostlybadfly at 4:37 PM