I had two tubs of vanilla ice cream sitting in my freezer left over from a family party and while I love vanilla ice cream, I wanted something with a little bit more interesting. An idea came to me after breakfast yesterday morning as I had a ton of dried tart cherries that I had reconstituted in orange juice to serve over oatmeal. The cherries were soft and juicy and developed a rich flavorful syrup so I thought this would be perfect to mix into the ice cream. I grabbed one tub of ice cream that was already partially eaten and added the cherries. To compensate for the sweetness I mixed in some used goat cheese to give it a tart flavor. I got the idea after seeing how some people make cream cheese ice cream by basically mixing cream cheese into vanilla ice cream and serving with fruit. 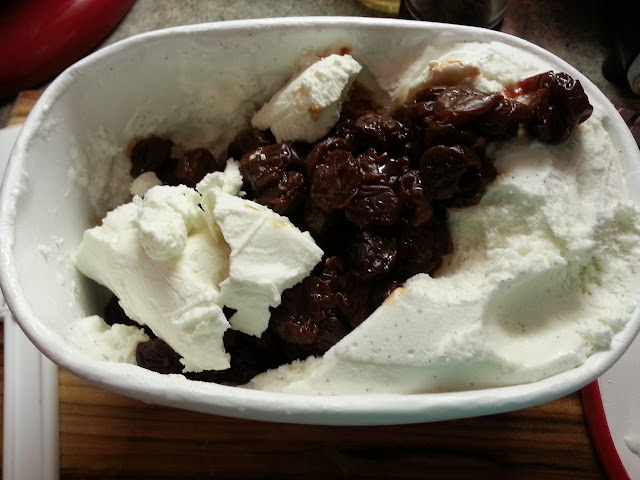 I let the ice cream soften a bit and then mixed all the ingredients together directly in the tub.  After mixing i placed back in the freezer to set for a couple of hours while we had dinner. 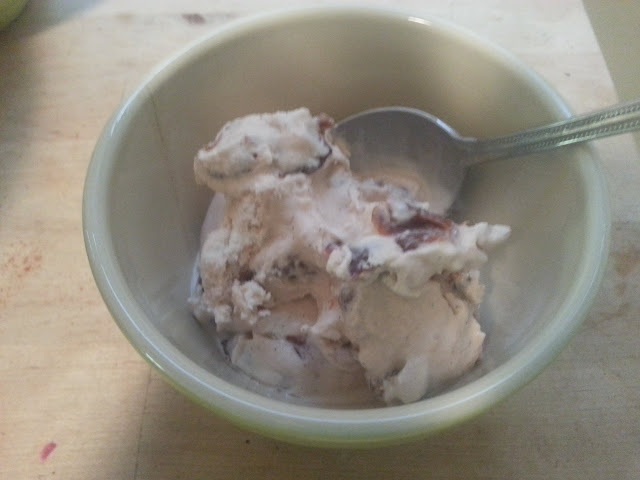 The ice cream was very good. the tartness from the goat cheese played well with the sweet and tart cherries, smoothed out by the vanilla ince cream. I have one tub left of vanilla ice cream so I'm excited to see what other combination I might be able to put together next week!
Posted by mostlybadfly at 7:56 AM