This dish is primarily based on a marinade I made consisting of dried guajillo and ancho chiles along with dried apricots and canela.  A warm and earthy version  which can be served with various sides. 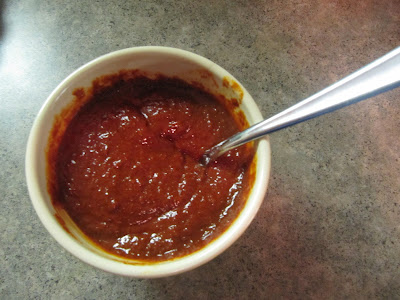 In this particular version I used this two marinade two chicken breasts for dinner, but the marinade can be on whole cut up chicken or even as a base in a braise. 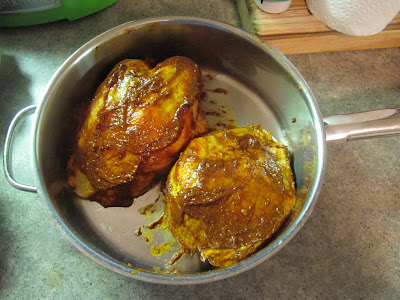 After roasting in the oven the chicken formed a very nice crust and the flavors had really concentrated while keeping the chicken moist. 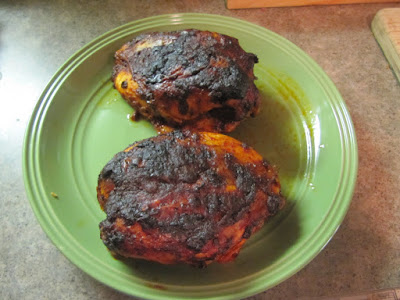 To prepare the chiles and apricots for the marinade: Set a couple of cups of water to boil as this will be used to rehydrate these ingredients. Remove the stems from the guajillo and ancho chiles and using a knife cut an opening along the sides of each to get to and remove the seeds. Roughly chop the chiles along with the apricots and place in a bowl. Here you will add the boiling water and cover using a smaller boil to keep the chiles sumberged. let these soak for 10 minutes to soften them up and drain.

2.) Once the chiles and apricots are ready, add them to a blender along with all the additional ingredients (except for the chicken) and puree until you get a loose paste consistency. some additional liquid can be added to get the blender going, keeping in mind not to let the consistency get too loose.

3.) In a large bowl add the pieces of chicken along with the marinade and using your hands mix together making sure to rub all the surfaces of the chicken in the marinade. Additional can be added under the skin of chicken as well. Let this sit for at least 15 minutes but as with all marinades it will have more flavor the longer it sits.

4.) Place the chicken in a roasting dish along with 1/4 cup to 1/2 cup of additional beer at the bottom and roast in the oven for an hour, taking it out halfway to baste the chicken.


Posted by mostlybadfly at 7:55 PM