I bit off more than I could chew because as usual I brought home way more many apples than I know what to do with.  I hope to do various apple projects with this haul.  As I was collecting apples it occured to me that I really wanted to try doing an apple cake.  I wanted to do a cake that had just as much apple in it as batter.  I was obsessed witht he idea of cutting through a slice and having just layers of apple throughout.

With my apples safe and sound at home, I began to prepare the cake.  First, I used my trusty paring knife to peel all the apples.  To slice the apples I used an apple corer/slicer.  I highly recommend using one of these to process the apples quickly, I bought one specifically for this purpose and it was a lifesaver.  I placed the slices in a bowl with some lemon juice and set aside. 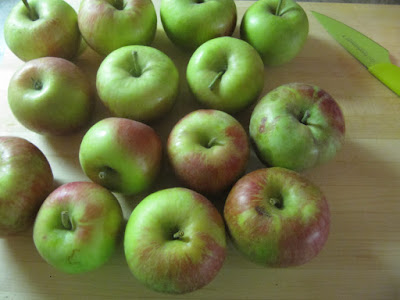 To prepare the cake batter I used a basic ratio of 1 part fat: 1 part sugar : 1 part eggs: 1 part flour.  The typical cake recipe calls for butter as the fat element but I decided to do half butter half sour cream.  The sour cream adds a certain tangy creaminess that I felt would go well with apple cinnamon.  I was thinking apple pie with sweet cream ice cream.  Using a scale I measured out 4 oz of softened butter along with 4 oz sour cream.  In a mixer with a paddle attachment I whipped the butter/sour cream mixture on high until incorporated. I gradually added 8 oz of sugar and whipped on high for 3 minutes, fluffing the mixture making sure all the sugar was evenly dispersed.  I stopped and scraped the sides of the bowl and whipped for another 30 seconds to assure everything came together.

I cracked 4 eggs in a separate bowl (about 8oz) and started the mixer on medium.  I gradually added the eggs one at a time to the mixture until fully incorporated.  It is during this step that I added 2 tablespoons of cinnamon and 1 teaspoon of rose water.  Vanilla or rum can be used here in place of the rose water. I also added a pinch of salt to help bring out the flavors. Finally I turned the mixer to medium low and gradually added 8 oz of flour. I stopped mixing as soon as it all came together, making sure to avoid over mixing the batter. 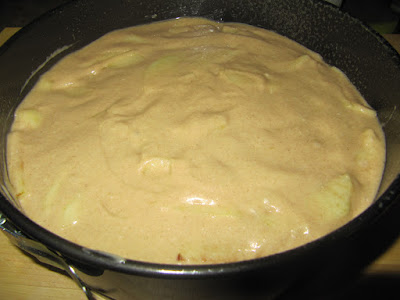 I removed the bowl from the mixer and poured the batter over the apples slices in a large mixing bowl.  I folded everything together, making sure all the apples were coated. It should be very chunky, like there might be one too many apples in it which sounds odd, but it works.  I poured the batter into a buttered small round cake pan, it should come up 3/4s of the way up the pan.  I baked in a 325 degree oven for 1 hour until a knife came out clean. 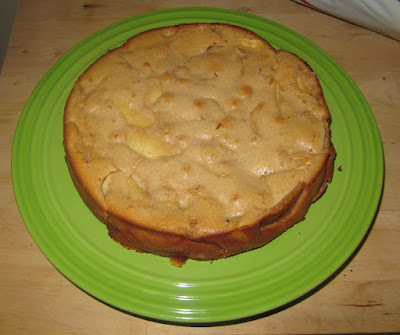 The cake was ridiculously good, it was hard not to eat a second slice.  The apples were soft but did not turn to mush and melded perfectly with the strong cinnamon taste of the cake.  The sour cream and apples kept the cake very moist, giving the cake the consistency that was like a cross between a cake and a bread pudding.  For a firmer cake I would add a few ounces more flour and a few more minutes in the oven.  It seems that the cake would hold up well and not lose too much moisture given the ingredients involded, making it a fairly simple but flavorful cake.

Posted by mostlybadfly at 7:22 PM