This past sunday I had the great pleasure of making a birthday dinner for my friend Cara who happens to be vegetarian.  I was excited to get to work with a variety of vegetables and cooking methods.

For dinner I decided to make chiles en nogada filled with veggies instead of meat, a roasted vegetable quinoa salad and a baked cabbage soup.  For dessert I made pecan bread pudding with a Mexican chocolate whipped cream.

For the roasted vegetable quinoa I utilized a variety of vegetables: parsnips, celery root, potatoes, onion, turnips and fennel. 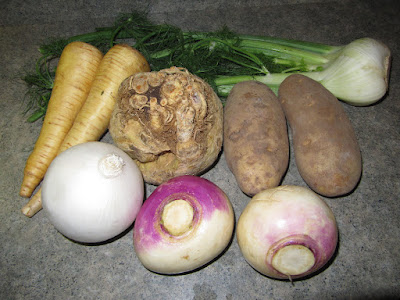 I diced all the vegetables and placed into baking sheets.  I drizzled with olive oil over, seasoned with salt and pepper and placed in the oven to roast. 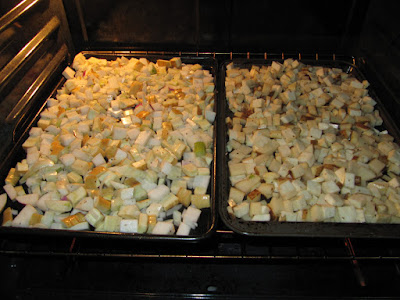 To prepare the quinoa I added 1 part quinoa and 2 parts water to a rice cooker, it cooks perfectly every time. I removed the vegetables from the oven once they were cooked through and slightly toasted. I tossed the quinoa in with the roasted vegetables and set aside to cool. 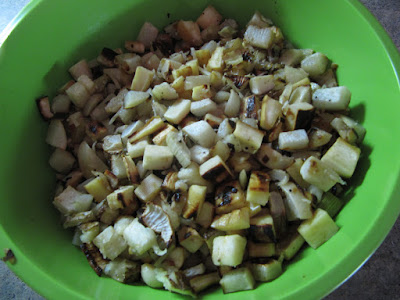 To make baked cabbage soup I first chopped one head of cabbage and added this to a deep pot.  I then added enough vegetable broth to almost cover the cabbage and cooked over high heat until the cabbage was tender but not mushy. 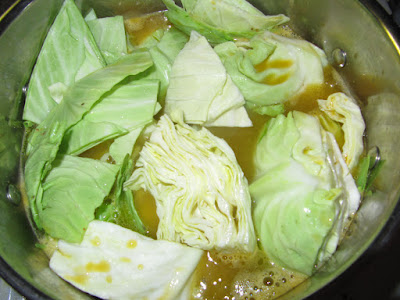 While the cabbage boiled I cut thick slices of crusty Italian bread that I then toasted in the oven.  I buttered a dutch oven and placed a few slices of the toasted bread as a base.  I topped the bread with grated gruyere cheese.  Using tongs I added about half of the cabbage and topped with dabs of butter.  I made another layer of bread, cheese, and cabbage.  I covered the dish with a final layer of bread and poured the vegetable broth into the dutch oven to soak into the bread.  I topped with more gruyere and placed in the oven to bake until the cheese is browned and bubbly. 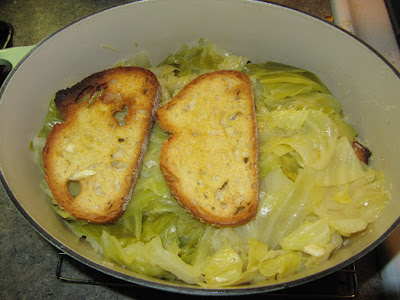 Chiles en nogada is a traditional Mexican dish that consists of a roasted poblano chile, stuffed with picadillo that is then topped with a walnut cream sauce and pomegranate seeds.

In this version I am stuffing the poblano with a variety of vegetables.  The main component of my stuffing was zucchini, I think it has a heartiness to it that worked well as a stuffing.  The rest of the ingredients were cremini mushrooms, tomatoes, and walnuts: 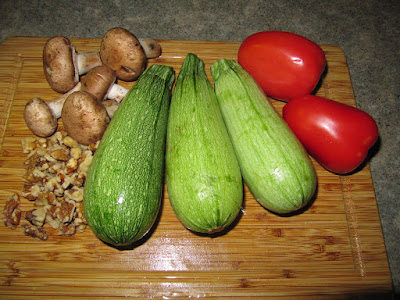 I diced all the vegetables and sauteed in a skillet with olive oil, onion and garlic: 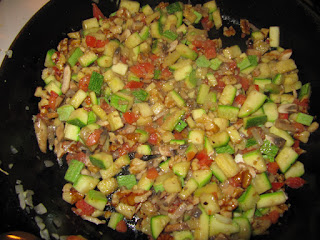 I prepared the poblano by first roasting it over an open flame, making sure to slightly char the outside.  After taking them off the flame I immediately placed them in a plastic bag to steam for few minutes before peeling off the skin. 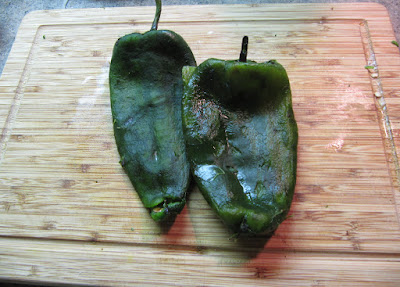 I cut the poblano along one side and shook out the seeds.  I then stuffed the chiles with the zucchini mixture, topped with a bit of crema mexicana, and sprinkled with some pomegranate seeds.


To complete the dinner I tossed the quinoa salad with chopped cilantro and lime juice and set along side the chile en nogada. I made a quick guacamole with avocados, lime, and onions and served with the dish as well.  I pulled the cabbage soup out of the oven and I served this separately in a bowl. 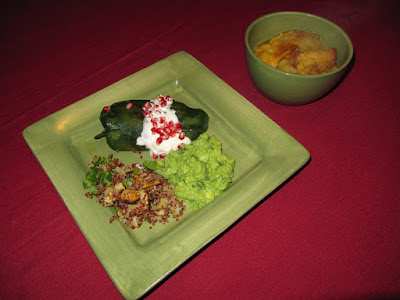 The texture of the roasted poblano went well with the stuffing and the quinoa had a bright earthiness with the lime and root vegetables.  The cabbage soup was luscious, very rich and satisfying.  It was a bounty of vegetables but we made sure to make room for some dessert.

I had it under good authority that Cara is a fan of bread pudding so this was an easy choice to make. 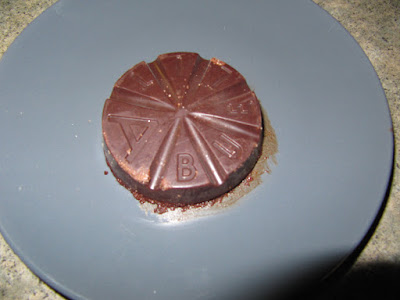 I first cut a loaf of crusty Italian bread into large cubes and placed in a buttered casserole dish and topped with roasted pecans. In a large mixing bowl I combined milk and heavy cream with eggs, vanilla, cinnamon and nutmeg. I poured the mixture over the bread and let this sit for 10 minutes so that the bread can properly soak.  I placed the pudding in the oven to bake until the top was golden brown. 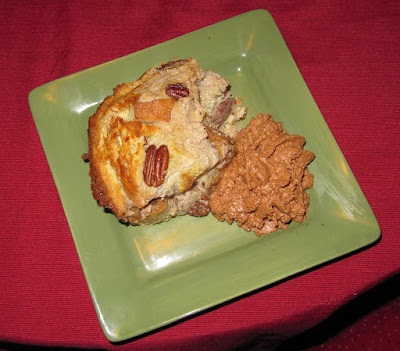 I am happy to say that our guest of honor enjoyed her dinner very much and I was glad to have the opportunity to do something special for her birthday.
Posted by Anonymous at 4:50 PM