Last night I prepared another quick and easy salad for dinner that I'd like to share.  I think this is somewhat reminiscent of a french salad I've had before but I'm not too sure.  In either case I made great use of left over veggies in the fridge and the result is one of my favorite new salads. 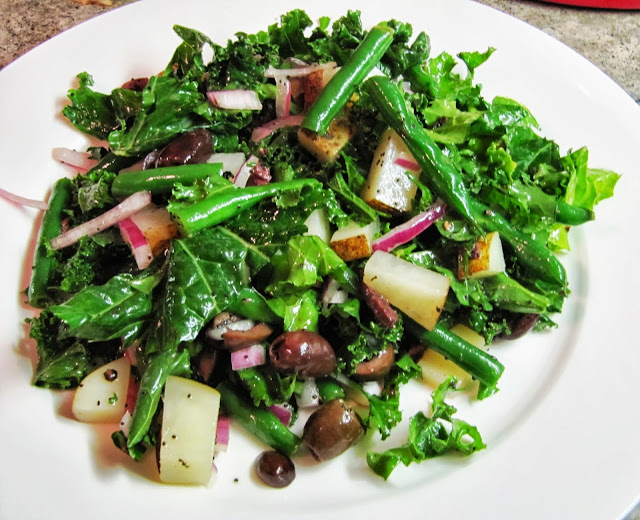 To prepare I took 1 potato and cut into cubes. I boiled for a few minutes in water then put in ice water to stop the cooking process.  I did the same with a big handful of green beans.  I then took two large handfuls of kale, washed, roughly chopped, and added to a large bowl along with the potatoes and green beans. I added about 1/4 cup each of thinly sliced onion and chopped olives.  I made a lemon poppy seed dressing by simply putting the juice of 2 lemons, 1 tablespoon honey, 1 tablespoon poppy seeds, olive oil, salt and pepper into a jar and shaking until combined.  I tossed the salad with dressing and it was ready to go.
Posted by mostlybadfly at 8:14 AM