shrimp in tomatillo salsa and a simple dessert.

last night I put a quick meal together that I would like to share.  My initial idea was to use chicken for this, but I was craving shrimp and thought I'd give it a shot.  I knew I wanted to make a simple tomatillo salsa for this and allow the shrimp to simmer a bit. 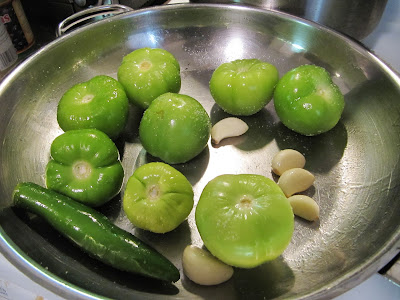 To begin I put 8 tomatillos, 5 cloves of garlic and 1 serrano chile in the oven at 400F to roast while I prepared the shrimp. 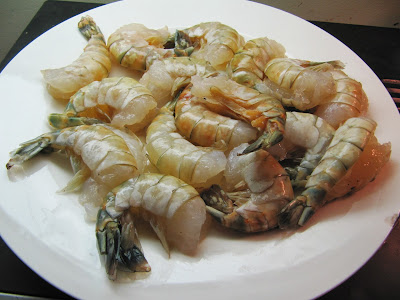 I used large shell on shrimp since i was planning to use the shells in the sauce.  The ones I picked up from the store were already deveined so it was a matter of taking off the shells. 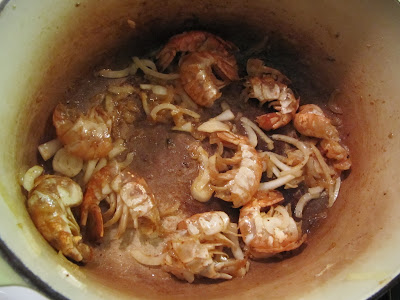 I fried a half a small onion and the shrimp shells in about a tablespoon of bacon fat, i figured this would add more flavor to the dish.  I kept cooking until the shells turned red and aromatic. When using shells it is always necessary to use some sort of combination of liquid and fat to draw out the flavors.  I read that alcohol does a better job of this so perhaps I will hit the shells with white wine or even tequila next time to draw out more flavor. This time I relied on the juices from the already roasted vegetables. 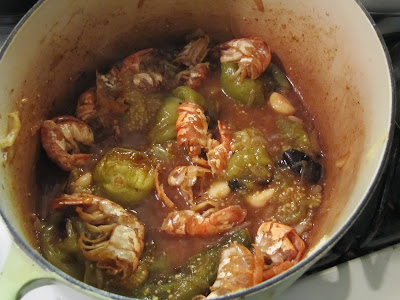 After the vegetables roasted for 30 minutes I added them to the pan to simmer a bit with the shells.  after about 10 minutes of simmering I removed the shells and pureed the tomatillos, serranos and garlic with the cooking liquid. 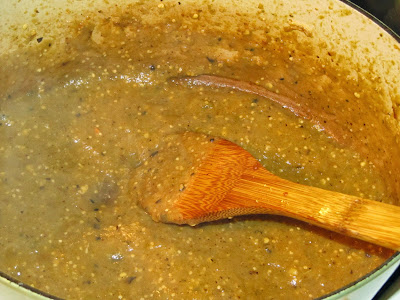 The result was a rich green tomatillo sauce with the aroma of shrimp.  I then added the shrimp to this sauce and simmered.  I unfortunately did not take a photo of the shrimp in the pan but this is the end result. 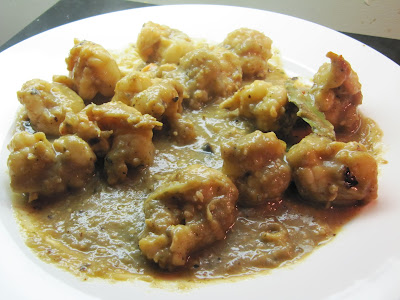 The shrimp seemed slightly overcooked due to the fact that they curled up pretty tightly though the texture was still rather plump and moist, so they were still enjoyable. To make a base to serve the shrimp I prepared brown rice with black bean puree. 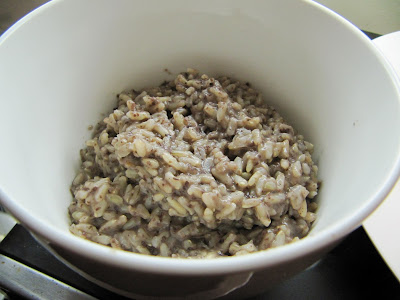 This was initially going to be two components.  Simple brown rice and a think black bean puree for texture.  Unfortunately the black beans had too much liquid and were not usable.  To remedy this i mixed the black beans in with the cooked rice and it tasted quite good.  This is probably something I will do more often with some slight modifications to spices and cooking time. 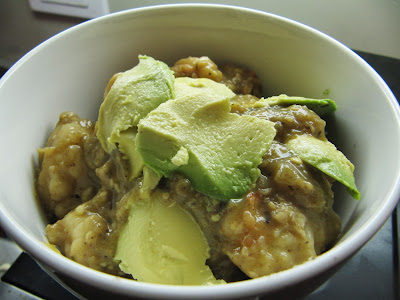 I spooned the shrimp in tomatillo sauce over my rice and black bean mixture.  I topped with slices of avocado I scooped out with a spoon to finish.  The dish had a decent amount of heat and the shrimpy tomatillo sauce went down into the rice giving it additional flavor. 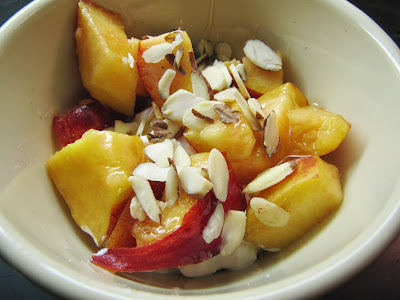 To finish off our meal I sliced chunks of peaces and served on top of a couple of spoonfuls of cottage cheese.  I added sliced almonds and drizzled a bit of honey on top.  This was a cool and light way to finish dinner last night.

Posted by mostlybadfly at 7:23 AM