I had a great time last night cooking up some dishes with our friend Andrés.  We initially planned to grill outside but found out there was a massive storm in the area.  This was easily solved by roasting the chicken in the oven and using a grill pan for the steaks.

I started the afternoon by spatchcocking and marinating a whole chicken.  This was a pretty exciting process for me since it was my first time preparing a chicken this way.  I used a pair of kitchen shears to remove the backbone of the chicken then opened up the chicken by cracking the breastbone to make it lay flat. 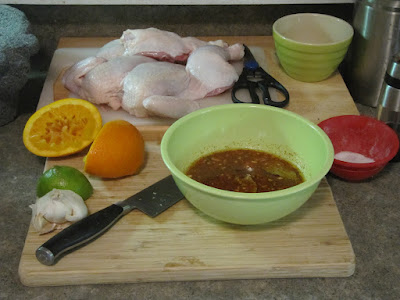 I marinated the chicken in a combination of orange juice, lime juice, minced garlic, ground guajillo chile, cumin, mexican oregano, olive oil, salt and pepper.  I let it sit for about 2 hours before roasting. I roasted the chicken at 450F at first for 15 minutes then lowered to 350F for the rest of the cooking time, about 45 minutes.  During the process I reduced some leftover marinade and basted about halfway through. 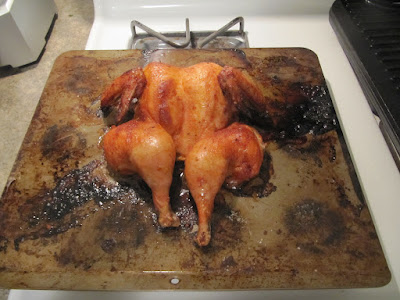 The first salad we made was a take on a three bean salad that Andrés named frijoles charros salad due to it's use of spicy andouille sausage and lime dressing along with cumin and ancho chile powder.  For this we combined canned garbanzo and kidney beans along with green beans that were blanched for about 2 minutes.  This along with some chopped cubanelle peppers and scallions were tosseded with the dressing.  We later added some queso cotija which really added a great flavor. This dish probably came out better than I could've expected, it had tons of flavor and will definitely be made many more times. 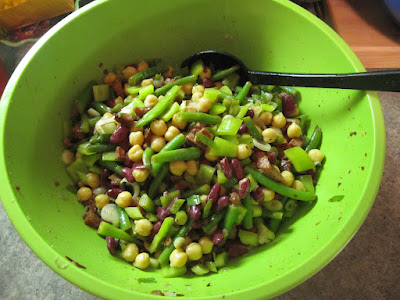 Next was a salad of mixed greens, with sliced strawberry, fennel and red onions.  I made the dressing by combining lemon juice, buttermilk, agave syrup, garlic, olive oil, salt and pepper in a jar and shaking.  I tossed the salad in the dressing right before serving. 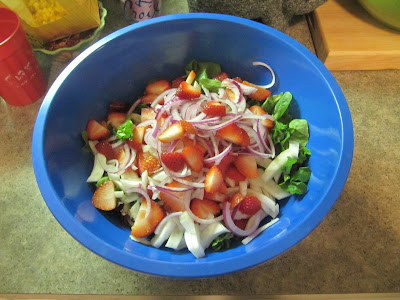 Andrés took over and grilled us up some arrachera.  The skirt steak was perfectly medium rare and had amazing flavor. 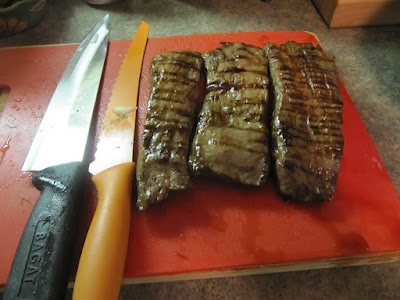 We had a great dinner that night, all the items came together wonderfully.  Thicken was flavorful and picked up some of the spice from the marinade.  The bean salad has become one of my favorite things and am craving it as I type. 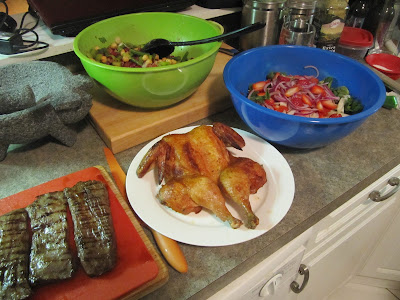 I've posted these recipes at recipes.comalcaliente.com: